4-H has grown over the years and the symbols reflect the rich traditions and the progressive spirit of 4-H.

The four H’s represent the comprehensive areas of development youth experience in the 4-H program:

The 4-H emblem is a green four-leaf clover with a white “H” letter on each leaf. The emblem was adopted nationally in 1911 and since then Congress has passed legislation twice to protect the 4-H name and emblem. The design is attributed to O.H. Benson, an Iowa School Superintendent.

The 4-H colors are green and white. Green represents springtime, life and youth while white represents high ideals and standards.

"To Make the Best Better." Carrie Harrison, a botanist with the U.S. Bureau of Plant Industry proposed this motto and it was later adopted in 1927 along with the 4-H pledge

The pledge was adopted in 1927 during the first National 4-H Club Camp in Washington, D.C. Otis Hall, a State 4-H leader in Kansas, was responsible for the original wording. The pledge remained unchanged until 1973 when the words "and my world" were added.

I pledge . . .
My head to clearer thinking
My heart to greater loyalty
My hands to larger service, and
My health to better living
For my club, my community,
My country and my world.

Protection of the 4-H name and emblem

The 4-H name and emblem are protected by a federal statute to ensure the consistent and correct use by all Extension staff, volunteers, members and authorized non-Extension entities. The Oregon 4-H Youth Development Program has the legal obligation to inform the public of federal protections and consequences of misuse by using the 18 U.S.C 707 protected 4-H emblem. Similar to a copyright, this protection means that the 4-H name and emblem can not be used without authorization by the national organization. 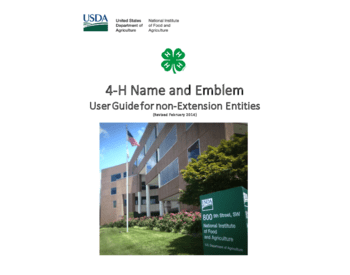