Black plastic has been used horticulturally since the 1950’s to increase crop yield, control weeds, conserve soil moisture, increase soil temperature and shorten time to harvest. By 2006 black plastic was being used on 40,000 acres in the U.S. Every acre under plastic generates about 100-120 lbs of plastic waste that has to be removed from the field and disposed of. Because the plastic is contaminated with soil, it is difficult to recycle. One strawberry grower estimated the cost of plastic mulch removal and disposal to be about $330 per acre. Despite the horticultural virtues of plastic mulch, its use contradicts the values of many organic farmers and consumers.

Paper mulch has always been allowed on certified organic farms. Plastic mulch has also been allowed as long as the mulch is removed at the end of the growing season. Last fall, the USDA National Organic Program also approved “biodegradable biobased films” for use in organic production and for soil incorporation. Currently the only NOP compliant biodegradable mulch is paper. So far no other biodegradable mulches are fully biobased and so do not meet this NOP criteria (see sidebar).

DeVetter, Miles and other researchers at WSU are evaluating biodegradable mulch alternatives to plastic mulch in vegetable and small fruit production. The rest of this article reports on their recent work.

Four potentially biodegradable mulches, BioAgri, BioTelo, WeedGuardPlus and SB-PLA were compared to black plastic mulch and a no-mulch control in 2010, 2011 and 2012 at WSU’s Northwest Washington Research and Extension Center in Mount Vernon (NWREC). Mulches were evaluated for durability, weed control, and yield of ‘Celebrity’ tomatoes grown in high tunnels and open fields.

Deterioration was worse in the open field than in the high tunnels, likely due to high winds, greater solar radiation and more rainfall. Overall, WeedGuardPlus, BioTelo and BioAgri had the greatest percent visually observed deterioration (PVD), while SB-PLA showed essentially no deterioration and was equivalent to black plastic.

In 2015, a new 5-year project was started at WSU’s NWREC-Mount Vernon to test 5 biodegradable mulch products, WeedGuard, BioAgri, Naturecycle, Organix, and an experimental poly-lactic acid (PLA) and polyhydroxyalkanoate (PHA) product. These mulches are being compared to plastic mulch and a no-mulch in ‘Cinnamon Girl’ pumpkin. This four year study is also being done at the University of Tennessee-Knoxville. Evaluation includes mulch impacts on crop production, soil micro-organisms, and mechanisms of biodegradation. Additionally, economical aspects of biodegradable mulch use and barriers to biodegradable mulch adoption will be investigated. This project is also funded by a USDA SCRI grant (award no. 2014-51181-22382).

Raspberry: plastic mulch may limit the natural emergence of red raspberry canes, but promote the establishment of tissue culture plants that are notoriously difficult to establish relative to bare-root stock. biodegradable mulches may be better for the canes if they can biodegrade before future cane emergence. Dr. DeVetter is working with Randy Honcoop of Honcoop Farms in western Washington to compare Organix biodegradable mulch and bare ground in ‘Wakefield’ tissue culture raspberry. They will observe mulch weathering and degradation to see if they could be useful during establishment.

Day-neutral strawberry: DeVetter is comparing three biodegradable mulches with black plastic and bare ground in ‘Seascape’ and ‘Albion’ strawberry. The biodegradable mulch treatments include: 1) a corn-starch based film; 2) a bio-based polyhydroxyalkanoate (PHA) based film; and 3) a cellulose-based mulch. In the first year of their study, all mulches provided adequate weed control, with the exception of the PHA-based film (Figure 4).

The PHA-based film weathered too rapidly, leading to increased weed cover later in the season. The formulation of the PHA-based film was subsequently adjusted by the cooperating mulch manufacturer to allow greater in-field stability required for strawberry production. Yields under biodegradable mulches were as good as under black plastic (Figure 4).

Future work will evaluate mulch performance and effects on yield. In addition, DeVetter, Miles and Shyam Sablani (WSU-Biological Systems Engineering), will also evaluate the potential for chemical migration of small, leachate molecules present in deteriorating mulches to move to developing strawberry fruits in contact with mulches. This will be the first time agricultural mulch will be evaluated as a food contact substance in the US and will be informative in revealing the occurrence and extent of chemical migration among agricultural products that me into contact with foods. This project is funded through the WSU-internal grant program, Emerging Research Issues.

Biodegradable mulches clearly offer an alternative to black plastic. For certified organic growers, paper mulch is the only currently available alternative, but other options may meet NOP requirements in coming years. Stay tuned for more information coming from WSU’s biodegradable mulch research program. If you would like more specific information, don’t hesitate to contact any of the authors of this article. 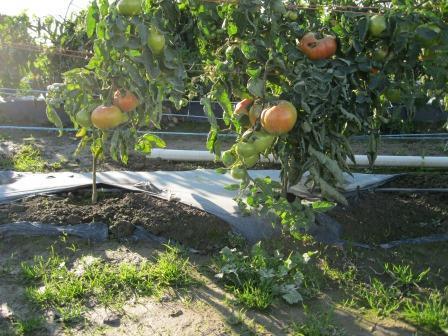 Figure 1. BioBag biodegradable mulch with tomatoes grown in the open field at WSU Mount Vernon NWREC, 24 Sept., 2012; the rip is due to weathering of the mulch over the course of the growing season, and longitudinal tears are characteristic of this type of mulch product. 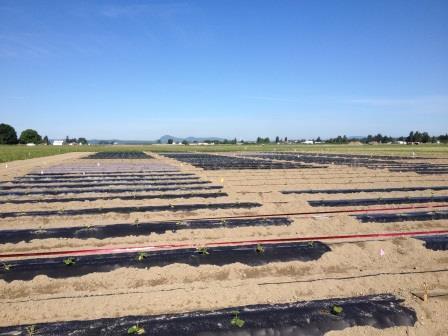 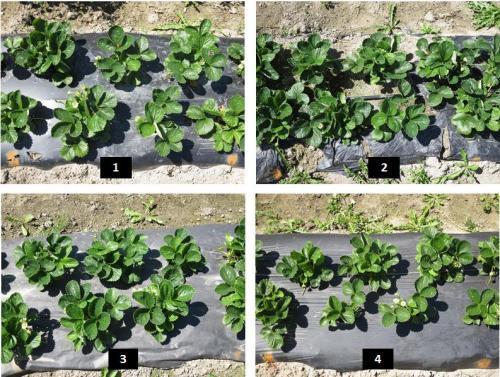 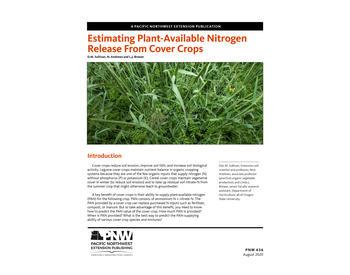 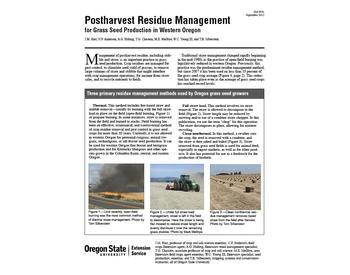 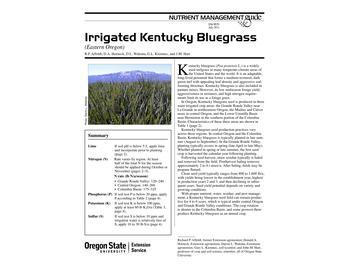 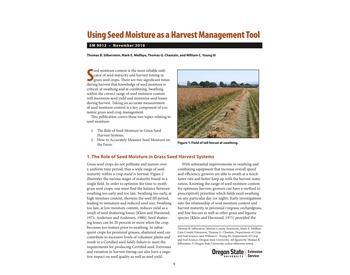 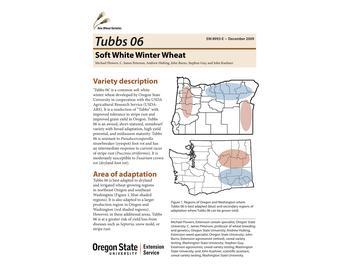 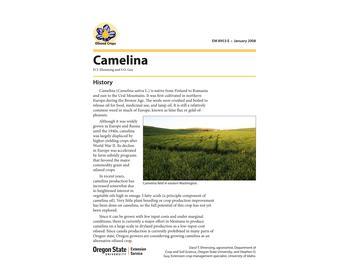 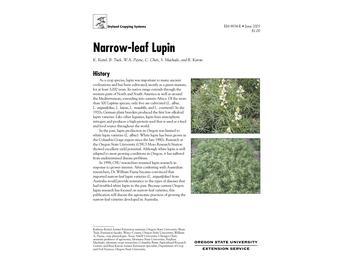 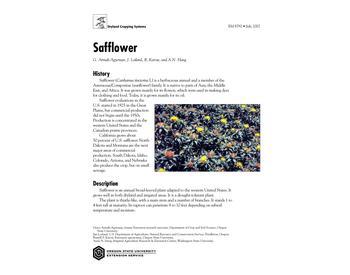 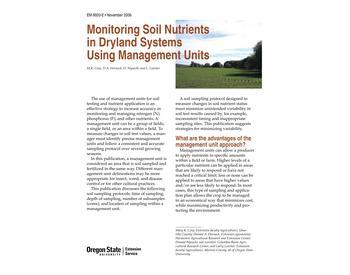 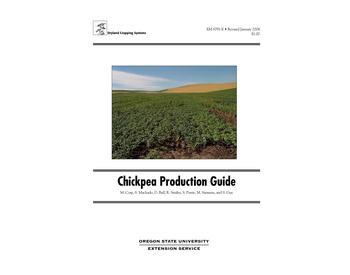 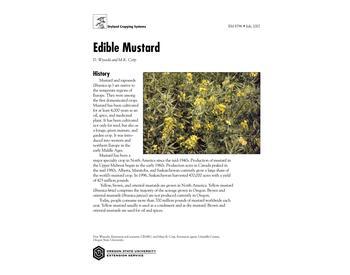 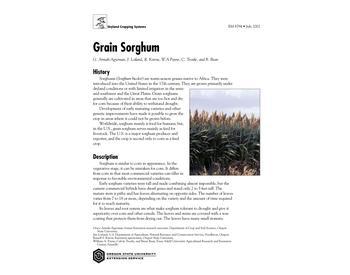 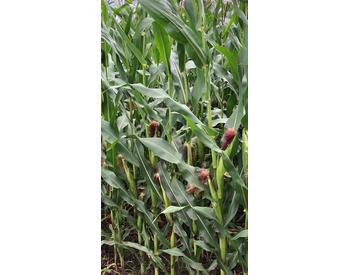 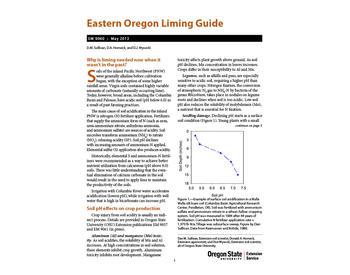 Liming is a new practice for the inland Pacific Northwest, necessitated by soil acidification caused by nitrogen fertilization. This publication provides guidance on how to evaluate cropping systems for lime need and how to determine lime application rate. 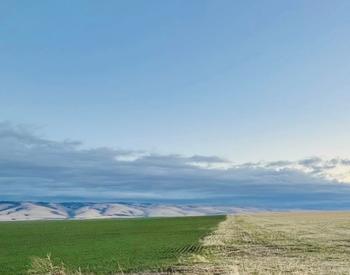 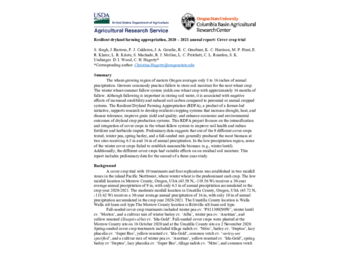 This report includes preliminary data for the second of a three-year study. Since this year was a record drought year, results could vary from a normal rainfall year. Finalized data and observations will be released in future as peer-reviewed studies, reports, and extension articles 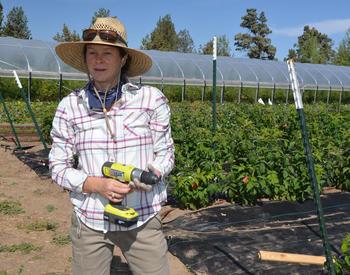