Organic pesticides usually come from natural sources and are minimally processed. These natural sources are usually plants — such as neem, pyrethrum (pyrethins), rotenone or ryania (botanical insecticides) — or minerals, such as boric acid, cryolite, or diatomaceous earth. There are also microbial pesticides.

The neem tree (Azadirachta indica) originated in Southeast Asia. It is an evergreen broadleaf in the mahogany family. The tree is widely distributed in Africa and India and as an ornamental in subtropical regions. The fruit is the size of a small olive and the seed contains 10–30% oil. The leaves, oil and bark have pesticidal properties. The major active ingredient in the oil is azadirachtin, sold as Neem Seed Extract or Neem Oil. However, there are more than 25 other active compounds in the oil. Neem has shown insecticidal, fungicidal and bacterial properties.

The neem tree has been used medicinally in India for centuries. It is known there as the toothbrush tree. It is used as a tea, to inhibit allergic reactions, and to inhibit plaque-forming bacteria. It has been used for skin infections and wounds as well as malaria and intestinal parasites in countries where it is native. It is found in soaps, lotions and toothpaste in the United States.

The neem tree has been used medicinally in India for centuries.

Azadirachtin is systemically taken up by plants through roots and weakly systemic in the leaves. It has both systemic and direct contact action. Only sucking and piercing insects are affected by the systemic form.

This extract also acts as an antifeedant, repellent, growth retardant, sterilant, direct toxin and deterrent to egg-laying. Extracts have inhibited feeding in 170 insect species in seven orders, normal growth in four orders and it is directly toxic to aphids, termites and various caterpillars. It disrupts metamorphosis in extremely small amounts.

Azadirachtin is very low in toxicity to mammals, is biodegradable, and has little effect on natural predators.

Azadirachtin is a very complicated chemical compound and belongs to the class called limonoids. Due to its complexity, it will be difficult for insects to become resistant to it. It is very low in toxicity to mammals, is biodegradable, and has little effect on natural predators. It does not appear to be mutagenic. The active ingredients biodegrade rapidly in sunlight and within a few weeks in the soil. It also has anti-fungal and antibacterial action.

As a pesticide, it is now generally available in most garden stores. Neem tree plantations are being established in suitable climates.

This is a microbial pesticide. Bacillus subtilis is a ubiquitous bacteria commonly found in various ecological niches, including soil, water and air. It does not have a history of pathogenicity from contact in the environment. In addition, there are other strains of B. subtilis that are registered as microbial pesticides.

The QST 713 strain of B. subtilis is known to be antagonistic toward many fungal plant pathogens. This antagonism may be achieved in several ways, including nutrient competition, site exclusion, colonization and attachment of the bacteria to the fungal pathogen. In addition, AgraQuest reports that the QST 713 strain of B. subtilis has been shown to induce plants' natural systemic resistance or systemic acquired resistance (SAR) against bacterial pathogens. These bacteria can stop plant pathogen spores from germinating, disrupt germ tube growth and inhibit attachment of the plant pathogen to the leaf.

B. subtilis is common in soil and plant litter without documented toxicity or pathogenicity in the environment. B. subtilis endospores are reported as having longevity in groundwater

Beauveria bassiana is a fungus that causes a disease known as the white muscadine disease in insects. When spores of this fungus come in contact with the cuticle (skin) of susceptible insects, they germinate and grow directly through the cuticle to the inner body of their host. The fungus proliferates throughout the insect's body, producing toxins and draining the insect of nutrients, eventually killing it.

The Beauveria bassiana fungus proliferates throughout the insect's body, producing toxins and draining the insect of nutrients, eventually killing it.

Once the fungus has killed its host, it grows back out through the softer portions of the cuticle, covering the insect with a layer of white mold (hence the name white muscadine disease). This downy mold produces millions of new infective spores that are released to the environment.

Beauveria is a naturally occurring fungus in soils throughout the world and has been researched for control of soilborne insects. Many soil insects, however, may have a natural tolerance to this pathogen, which is not exhibited in many foliar pests. Therefore, the commercial development of this fungus for biological control has primarily been targeted against foliar feeding pests.

Beauveria bassiana attacks a wide range of both immature and adult insects. Besides silkworm, the extensive list of hosts includes such important pests as whiteflies, aphids, grasshoppers, termites, Colorado potato beetle, Mexican bean beetle, Japanese beetle, boll weevil, cereal leaf beetle, bark beetles, lygus bugs, chinch bug, fire ants, European corn borer, codling moth and Douglas fir tussock moth. Natural enemies, such as lady beetles, are susceptible too. It has even been found infecting the lungs of wild rodents and the nasal passages of humans. There are many different strains of the fungus that exhibit considerable variation in virulence, pathogenicity and host range. It occurs in the soil as a saprophyte.

As with all insect-pathogenic fungi, Beauveria produces spores that are resistant to environmental extremes and are the infective stage of the fungal life cycle. Unlike bacterial and viral pathogens of insects, Beauveria and other fungal pathogens infect the insect with contact and do not need to be consumed by their host to cause infection. The spores (called conidia in this case) infect directly through the outside of the insect's skin.

As with all insect-pathogenic fungi, Beauveria produces spores that are resistant to environmental extremes.

Under favorable temperature and moisture conditions, a conidium (singular of "conidia") adhering to the host cuticle will germinate. The fungal hypha growing from the spore secretes enzymes that attack and dissolve the cuticle, allowing it to penetrate the skin and grow into the insect body. Once inside the insect, it produces a toxin called Beauvericin that weakens the host's immune system. After the insect dies, an antibiotic (oosporein) is produced that enables the fungus to outcompete intestinal bacteria. Eventually, the entire body cavity is filled with fungal mass. When conditions are favorable, the fungus will grow through the softer parts of the insect's body, producing the characteristic "white bloom" appearance. Relative humidity must be 92% or more for B. bassiana to grow outside the insect. These external hyphae produce conidia that ripen and are released into the environment, completing the cycle.

In addition to infecting insects, B. bassiana can colonize corn plants, having the capability of living in the vascular tissue of certain corn cultivars as an endophyte. European corn borer tunnelling is reduced in corn plants with the fungus. In studies in Iowa, the fungus colonized the plant when applied as a granular formulation of conidia on foliage at whorl stage, moved internally in the plant, and persisted throughout the season to provide significant suppression of corn borers.

Regular household vinegar is not very effective in killing most weeds. There is a 20% acetic acid that is very active weedkillers, but also must be handled with care.

Spraying the strong solution on a plant strips off the protective coating on the foliage causing the plant to desiccate. Some people spray the vinegar on the soil to lower the pH to a nonviable level for the plants. This is disastrous for soil life. The effect lasts from several months to a year. It may take up to six months for woody plants to die completely. The soil would then need to be rehabilitated with lime and then 3–4 inches of compost in a blanket.

Vinegar is used for weed control on warm, dry days over 65 degrees F. 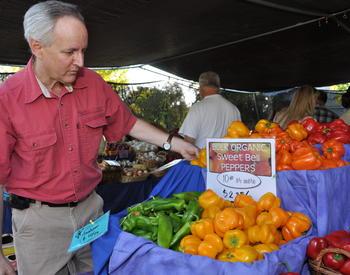 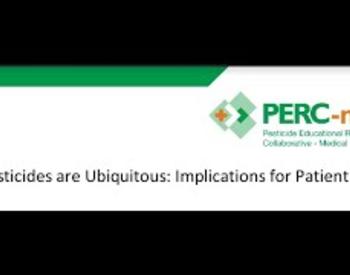 OSU's Kaci Buhl speaks with a patient care assistant from the University of California about the importance of recognizing pesticide exposure in healthcare, and common frustrations with diagnoses and treatment plans. She offers tips... 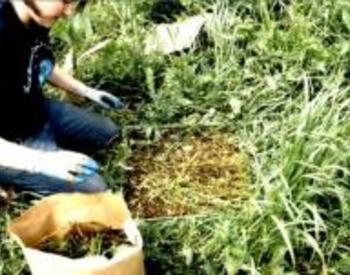 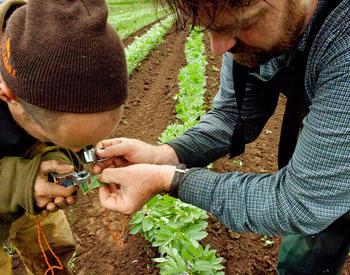 In 2018, Extension created a half-time position for an organic vegetable Extension professor of practice, which is now held by Nick Andrews, a small crops specialist. 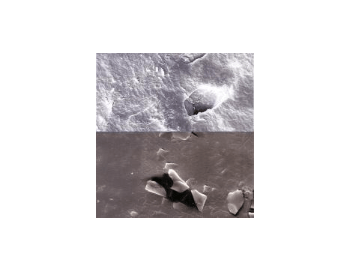 Air blast sprayers are one of the most common sprayer types used in specialty crop production. These machines are designed for heavy use on farms, and like all machinery, require regular attention to function effectively. This ... 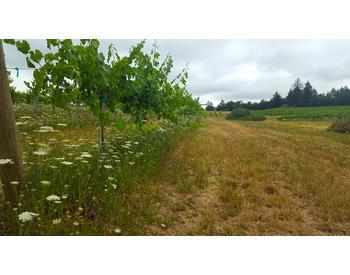 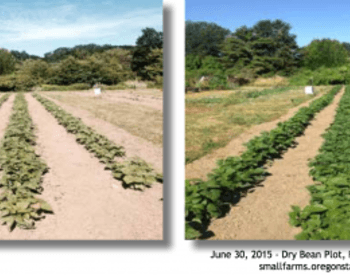 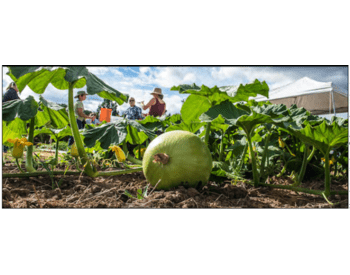 This publication provides an overview of dry farming, describes some of the management practices that support growing organic vegetable crops without supplemental irrigation in this region, and offers some additional resources. 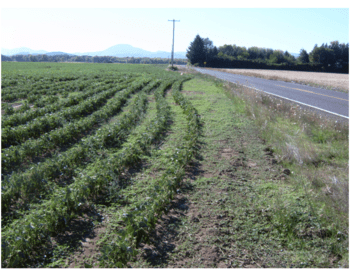 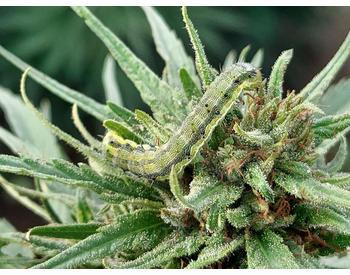 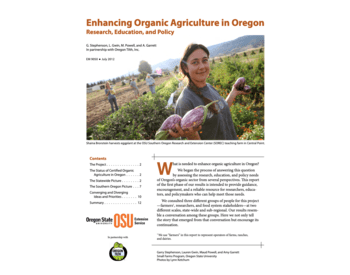 This report combines different perspectives--farmers, researchers, and food system stakeholders across statewide and sub-regional scales--to shed light on what is needed to enhance organic agriculture in Oregon. Some recommendations are ... 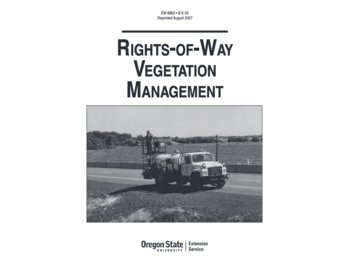 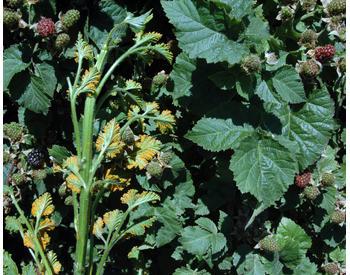 A comprehensive guide to plant disease management in the Pacific Northwest. Includes materials and tactics suitable for organic production and homeowner use as well as for commercial production. Covers testing services, common ... 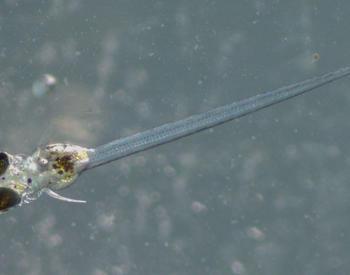 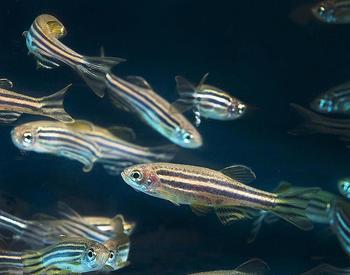 The discovery of a new gene in zebrafish could lead to a better understanding of how exposure to chemicals leads to disease in humans. 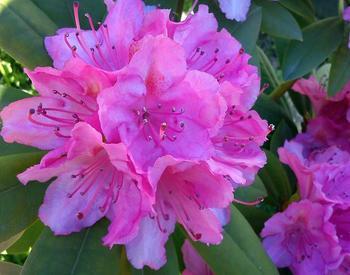 Let OSU Extension experts pave the way to truth when it comes to practices in the garden.