Boardman, the little northeast Oregon dairy town on the banks of the Columbia River, has had its share of challenges in 2020. But one of the bright spots has been the community coming together to establish a badly needed resource for Morrow County’s food insecure families.

The Boardman Food Pantry, ushered to nonprofit status by an alliance of partners including the Oregon State University Extension Service, is now distributing weekly meal boxes to more than 100 families.

“It’s definitely been a gigantic community effort. There’s nothing like a crisis to bring a community together,” said Anna Browne, OSU Extension Open Campus coordinator in Umatilla and Morrow counties. “It’s been really incredible.”

The efforts to start a food pantry in Boardman actually started in October 2018, with a $4,325 FEAST (Food, Education, Agriculture, Solutions, Together) grant from the Oregon Food Bank. The following April, OSU Extension convened a community listening session. The discussion was in English and Spanish and the materials provided were in both languages.

Families at the listening session shared experiences with food insecurity in the last 12 months.

“It was a good listening session,” said Angie Treadwell, Extension SNAP-Ed coordinator for Umatilla and Morrow counties. “One of the  things the attendees talked about was the need for an emergency food pantry in Boardman. The nearest food pantry is 12 miles away in Irrigon and is only open one day a week for limited hours.”

Unfortunately, the committee never gelled on how to use the FEAST grant, and the initiative stalled for almost a year.

“We knew there was need but there wasn’t an urgency,” Browne said.

Then the COVID-19 pandemic began. Businesses closed their doors under state-mandated orders. People lost their jobs fairly quickly. In March, a local church wanted to partially convert a classroom into a food pantry. The Oregon Food Bank gave its blessing for the FEAST grant to be used for the effort. The grant paid for shelving, a small refrigerator, and two months’ worth of food.

“Then we had people who wanted to start donating,” Browne said. “People were literally writing $50 checks. Businesses caught wind of what we were doing and wanted to donate. This was all trickling in the first part of May.”

Then, on May 30 a strong thunderstorm with winds of up to 70 mph rolled through northeast Oregon, uprooting trees and downing power lines. Power was knocked out for thousands in Umatilla and Morrow counties, including at the Wilson Road Mobile Home Park in Boardman, which was also heavily damaged by uprooted trees.

“People then started donating like crazy,” Browne said. “That snowballed into an emergency donation from the Oregon Food Bank, which delivered 102 emergency boxes and three pallets of food.”

“We went through the entire set-up of starting a nonprofit in an economic crisis and pandemic,” Browne said. “Once people knew that we had a nonprofit established, we started receiving bigger checks.”

Browne describes her role as a “small part of the process.”

But, Treadwell said, “Anna has played a key role in bringing together resources and making something incredible like this happen. Creating a nonprofit isn’t a small task. It’s a lot of work.”

Amazon Web Services gave $25,000 it was set to receive from the Umatilla Electric Cooperative – which refunds profits to its members through its Capital Credits program. Northwest Farm Credit Services, Lamb Weston and Threemile Canyon Farms each chipped in $5,000.

The pantry distributes meal boxes on Tuesdays and Fridays. The boxes include staples such as rice, cereal and pasta, and perishable items such as fresh produce and cheese.

The pantry has now surpassed $300,000 in donations. That funding enabled organizers to purchase a building and furnish it with shelving, refrigerators and freezers. The pantry has been providing food boxes to approximately 60 households and nearly 200 people per week. Boardman now has a resource that high-risk community members can turn to in times of need. 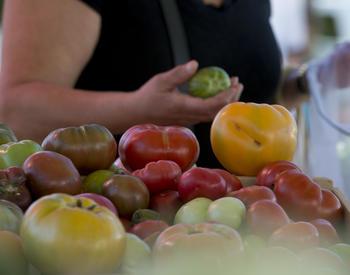