CORVALLIS, Ore. – If you have a good strong trellis, are a bit of a gambler and have a love of kiwifruit, there’s no reason not to grow your own crop. As vigorous as they are, though, don’t expect to plop these vines into the ground and stand back.

There are three types of kiwifruit, Strik explained, the most common being the fuzzy kiwifruit (Actinidia deliciosa) available at the grocery store, usually the cultivar called ‘Hayward.’ Joining the lineup are hardy kiwifruit (A. arguta); and kolomikta or arctic kiwifruit (A. kolomikta), which is not often grown for fruit. Instead, gardeners become enamored of the variegated pink leaves and use it as an ornamental vine.

Hardy kiwifruit, also called kiwiberries because of the grape-sized fruit, are most suited for home gardens because they are best adapted to Oregon’s climate, Strik said. The highly aromatic fruit has smooth, green skin – sometimes with a red blush – that’s edible, making them great for snacking. They are better adapted to our region because they are very winter cold hardy and fruit will vine ripen from mid-September into mid-October. You’ll sometimes find them at farmers markets and some grocery stores.

Fuzzy kiwifruit don’t ripen on the vine and are harvested in fall when they are “green ripe.” They can be stored in a cold area for months, which is why you’ll find fuzzy kiwifruit in grocery stores year-round. They are best grown in warmer regions like California, because vines can get winter cold injury in most areas of Oregon.

Of the hardy kiwifruit, the easiest to find are ‘Ananasnaya,’ (sometimes called ‘Anna’) with jade-colored skin, bright green flesh, black seeds and a pineapple-type flavor (the name means “pineapple” in Russian) and ‘Ken’s Red,’ a New Zealand cultivar with olive green skin and darker green flesh with deep red streaks.

“The young shoots and fruit of all kiwifruit species are sensitive to frost injury,” Strik said. “Temperatures of 30 degrees F or less for only 30 minutes can severely damage newly emerging shoots in the late winter through spring.”

To reduce the chance of damage, grow kiwi plants in warmer areas of the garden that are protected from frost, avoiding low areas or cool sites. When temperatures are forecast to drop to 32 degrees F or lower, drape the vine with a row cover before sunset and remove it when temperatures rise above freezing.

Strik, who is the author of Extension’s publication Growing Kiwifruit in Your Home Garden (https://catalog.extension.oregonstate.edu/em9322), offers additional tips: 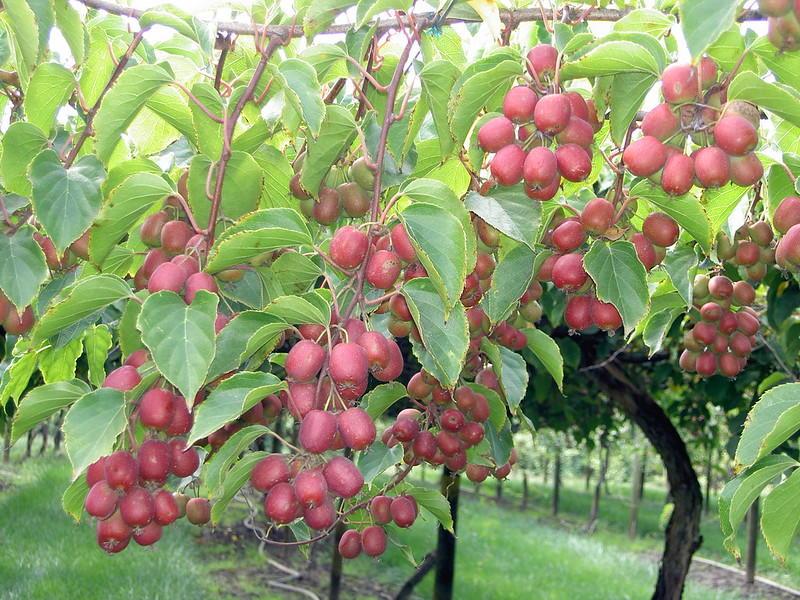