CORVALLIS, Ore. – In 2021, Erik Larsen, owner of a cut flower farm in the Willamette Valley, saw his crop decimated by voles. So did many farmers and ranchers in western Oregon.

Voles are members of the rodent family. Many species live in Oregon, including gray-tailed voles (Microtus canicaudus) that are commonly found in valley grasslands, most now used for agriculture. Often referred to as meadow mice or field mice, voles grow no more than six inches in length and breed rapidly.

“Around the beginning of July, I started noticing that the dahlias pushing up were underperforming,” Larsen said. “I pulled up a couple of tubers and there was nothing there. They’ll eat anything green. I lost 90% of my crop.”

In non-peak years, thousands of vole holes can be strewn across an acre, many of them unoccupied. Looking for live burrows is difficult, time consuming and expensive, making non-rodenticide control almost impossible.

"Because setting and clearing traps takes even more time than scouting it would be helpful to have more confidence that there is a vole in a particular tunnel before investing time and effort."

In response, Andrews, Dana Sanchez, OSU Extension wildlife specialist and associate professor in the College of Agricultural Sciences, and other collaborators took the novel approach of having dogs use their powerful noses to sniff out burrows used by live voles, giving a heads up to farmers looking for locations to set traps. The dogs, including Andrews’ standard rat terrier, Bijou, were given the scent and, working with handlers, scouted fields and indicated the burrow entrances where voles were living.

“Because setting and clearing traps takes even more time than scouting it would be helpful to have more confidence that there is a vole in a particular tunnel before investing time and effort,” Sanchez said. “Our central hypothesis is that canine assistance of live voles can make snap-trapping a feasible, nontoxic option to effectively manage voles on farms, especially if conducted before the breeding season starts.”

Reproduction slows in winter, making it the best season for scouting and trapping, Sanchez said. Voles, like many prey animals, have adapted to produce offspring at a rapid rate to ensure their survival. The extremely prolific gray-tailed voles begin mating at three weeks and have numerous litters each year, leading to multiple generations breeding at the same time.

In some years growers get a reprieve when the vole population decreases, as it did in 2022. The reason for the boom-or-bust cycle is the $64 thousand question, Sanchez said. It’s not clear why and the research is ongoing.

Preliminary results of the canine-assisted research are promising. Dogs are much more efficient than humans at finding live burrows. Dogs took 97 minutes to identify a burrow. In the same amount of time, it took unassisted humans 232 minutes, according to statistics supplied by Sanchez.

Gray-tailed voles double their damage with long burrows that can interrupt shallow root systems. At one location the team found a network of tunnels 11 feet long with at least 40 entrance holes. The voles were destroying a pasture and encroaching on neighboring vegetable crops.

“They have an impact that goes beyond what we would expect from a single species,” Sanchez said. “Burrowing rodents have so many impacts on their habitat as they eat plants and make their burrows.”

Gray-tailed voles are native to the Willamette Valley, where many crops are sown in what was once native grassland. Because the valley is their home, there will always be another vole waiting for an empty spot, Sanchez said.

The idea of using a dog to find live voles intrigues Karl Mohr, owner of Jackson Family Farm since 2006, so much so that he’d consider using a dog. Mohr has used drones for detecting voles but said any kind of canopy precludes visual confirmation. Dogs solve that problem.

Dogs have long been used for detection of drugs and more recently cancer, diabetes and other diseases so it wasn’t too much of a leap to use them for voles, Andrews said. To achieve the rigorous and repeatable accuracy required for canine detection, dogs and handlers must be trained and tested for accuracy, which takes time, facilities and money. But canine detection could translate to cash saved by controlling voles before populations can grow, the researchers said.

The dog-handler teams used in the study were recruited from successful participation in the elite level of the National Association of Canine Scent Work, a group competing in the sport commonly known as “nosework.”

“I love dogs,” Sanchez said. “In the past couple of years, I’ve gotten involved in dog sports, including nosework. Even before that I was aware of how people were using dogs to do all kinds of things. Being in this job for 15 years and hearing about vole damage and the need for better tools and solutions, it seemed a natural thing to explore using dogs. It’s especially important for organic farmers who can’t use zinc phosphide, which will kill other animals if exposed, requires licensing and protective equipment to purchase and use, and even for conventional operations is subject to strict laws that must be followed.”

In 2023, research collaborators are using a grant from Western SARE (Sustainable Agriculture Research and Education) to focus on pastures, where’s there’s an “intense need,” according to Andrews. One organic grower he works with made the drastic – and expensive – decision to plow under his pasture and reseed it.

“Pastures are one of the toughest to search because of the amount of plant material,” Andrews said “Whether visually searching or catching scent, there’s a whole lot of clutter on the ground. We’ll be getting data from six pastures this year.” 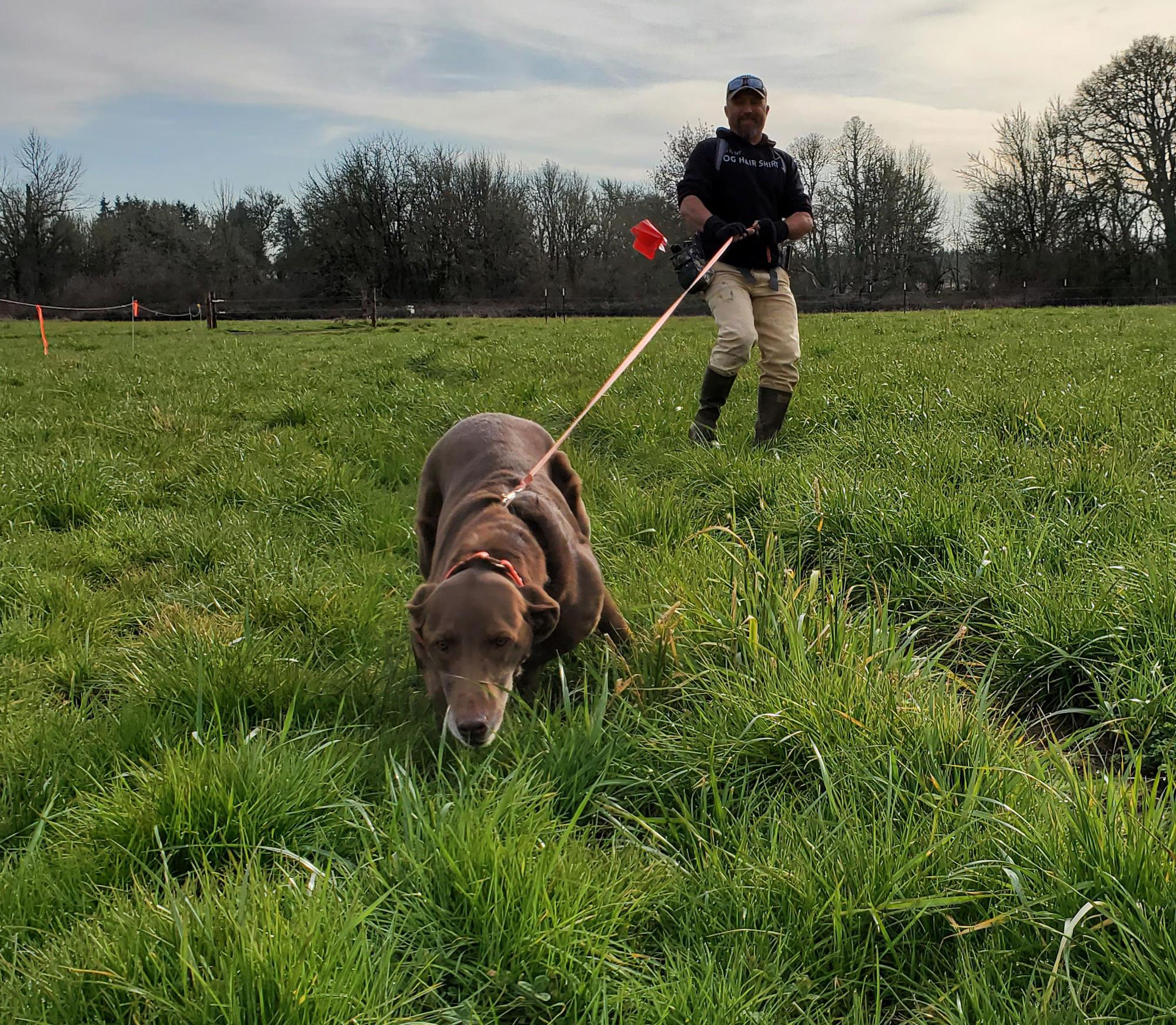 David Leer holds on as his dog Daphne scouts for voles in a research project using dogs to find active vole holes. 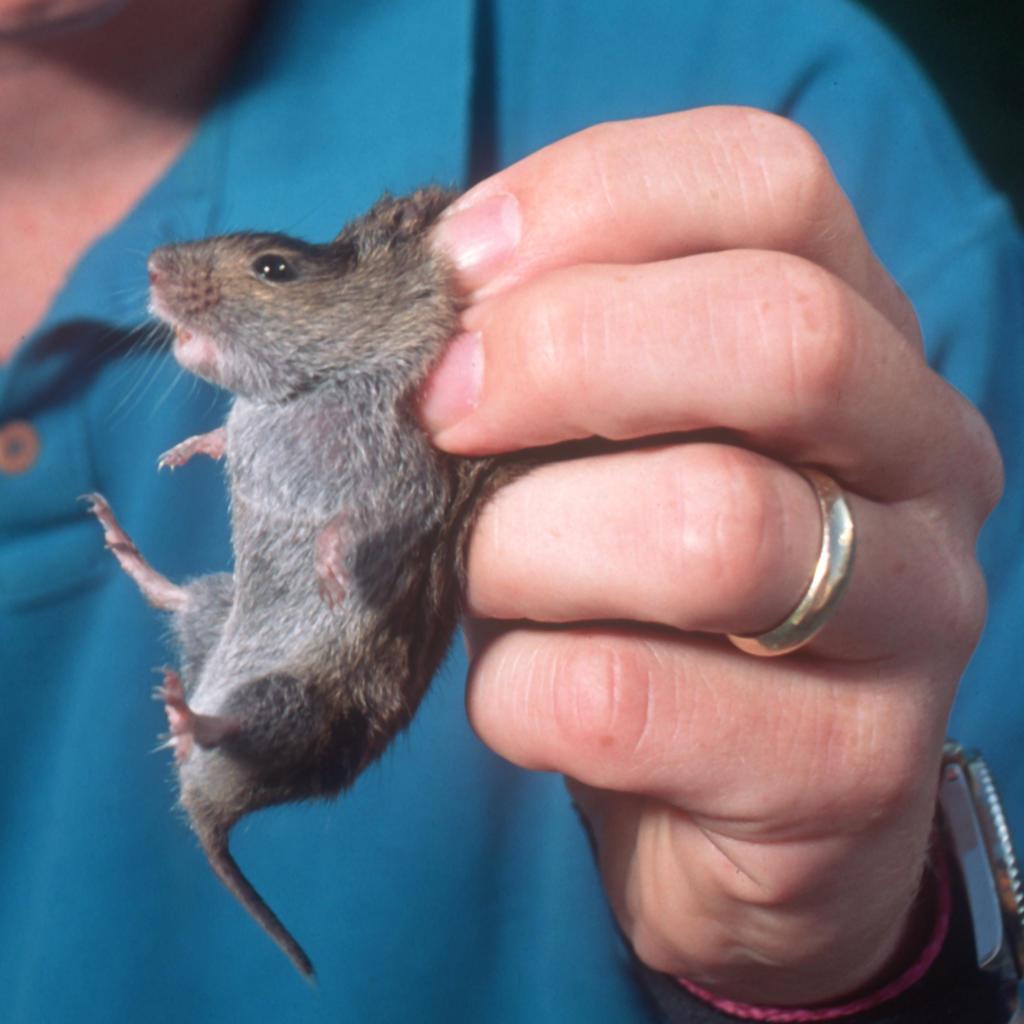