Timing can be important when watering vegetables

CORVALLIS, Ore. – Timing can be important when watering your vegetables.

Ross Penhallegon, a horticulturist with the Oregon State University Extension Service, recommends watering during the early morning hours. That's because there is usually less wind to affect the soaker hose, drip or sprinkler pattern. Plus, the temperatures are lower in the early morning, meaning more water gets into the soil and doesn't evaporate.

Also, if you are on a community or city water system, pressure is usually better in the early hours, so you can cover more area with your watering.

If you have an automatic system, any time between 5 a.m. and 10 a.m. is a good time to irrigate. Some water companies recommend that people water between 4-6 a.m. or 9-10 a.m. to avoid the busy morning rush, Penhallegon said.

"Avoid water application in the late afternoon, so that the plant foliage is dry going into the night," suggested Penhallegon. "The less the foliage is wet, the smaller chance there is of plant disease problems on turf, vegetables or flowers."

During summer, plants will wilt severely on a hot afternoon. If they are drooping, it's usually fine to water them later in the day, he said. Plants are not typically injured by watering in the heat of the day, he said, but some plants may be burned by water remaining on leaves in bright sunlight.

To know if your vegetables need water, study the plants' appearance and the soil, Penhallegon said.

"Wilting during the day, slow growth, or dull green color are the best indicators that plants are thirsty," he said. "Just because the surface of the soil is dry doesn't mean plants need water. But, if 1-2 inches of soil is dry, chances are a watering is needed."

There are also certain periods in a vegetable plant's life cycle when moisture is critical for the formation of the most robust, best-quality produce, Penhallegon said. Below is a list of vegetables and the times when they need more water: 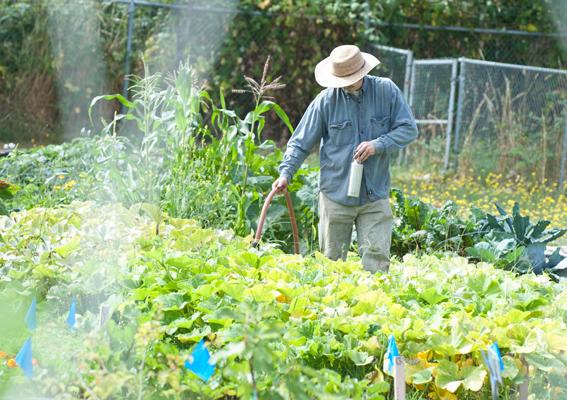 Watering during the early morning has several advantages.