How to avoid and correct home moisture problems

BEAVERTON, Ore. – Mold season is here, and although excess moisture – both inside and outdoors – can cause a wide variety of problems in the home, knowledge and simple measures can help keep a house mold-free.

When November weather arrives, heated air can trigger moisture problems because it holds more moisture than cool air. When warm air comes in contact with a cold surface, it cools down and excess moisture condenses, usually on the spot – notably single-pane windows or non-insulated walls. The moisture left behind can lead to mold, mildew and high concentrations of bacteria and dust mites.

An important first step to prevent and correct indoor moisture buildup is to use bath and kitchen fans to quickly pull moisture out of the room before it spreads to the rest of the house, according to Jeanne Brandt, family and community health faculty member with the Oregon State University Extension Service in Washington County.

"If a fan that vents to the outside does not exist in the kitchen and bathroom, consider having one installed," she said.

Most indoor moisture is caused by normal respiration of people and pets, but other activities also can be a source of excess moisture, Brandt said, such as baths and showers and hanging wet towels and clothes inside to dry.

Firewood stored indoors, though seemingly dry, can be a problem, as well as uncovered aquariums and large numbers of houseplants (more than five to seven). Indoor humidity levels are best when between 30 and 50 percent relative humidity. You can measure levels with a hygrometer, a low-cost purchase from a hardware or electronics store.

Outdoor moisture gets into houses by rain, snow or ground water leaking into basements, crawl spaces, roofs and walls. Water also moves in through porous materials, such as vertical movement through a cement block wall. Vapor diffusions allow moisture to permeate even through solid surfaces such as cement, gypsum board or wood.

The following OSU information about mold also is available online: 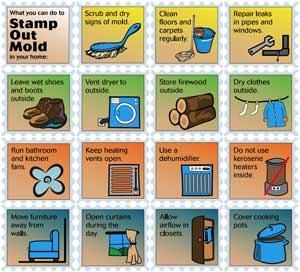