Use Caution When Irrigating Oaks and Madrones

Excessive summer irrigation of oak and madrone trees may promote fungal diseases such as the oak root fungus (aka armillaria root disease, Armillaria mellea) and crown rot (Phytophthora spp). Irrigation near the base of the tree is especially risky, and trees growing in poorly drained soils are at higher risk. Root disease symptoms include undersized, discolored, or prematurely dropping leaves, branch dieback, and eventual tree death.

Irrigation near the base of the tree is especially risky

However, while these species are drought-tolerant, they may benefit from supplemental summer irrigation during prolonged droughts.Keep the water at least 10 feet away from the tree’s root crown, or applied to the outer two-thirds of the root zone. Infrequent, but deep watering is more beneficial than frequent, light watering.

Note that other trees, including conifers, develop problems from excessive irrigation and poor soil drainage. These may include asphyxiation (drowning) of roots, preventing water update, and increased susceptibility to root disease. 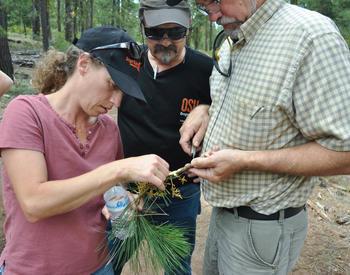