This neglected apple tree is 24 feet tall and has a spread of 24 feet (only half the tree is shown). Because the trunk is fairly solid and the tree is basically healthy, it can be restored.

Careful pruning over a period of years will be required to:

If you tried to do it all at once the heavy cutting to reduce tree height you'd produce excessive and unmanageable regrowth in the remaining limbs It's better to take it in stages.

The five basic pruning stages, or steps, are outlined here. Whether or not you have a particular apple tree in mind, follow the steps as though you were doing the pruning yourself. 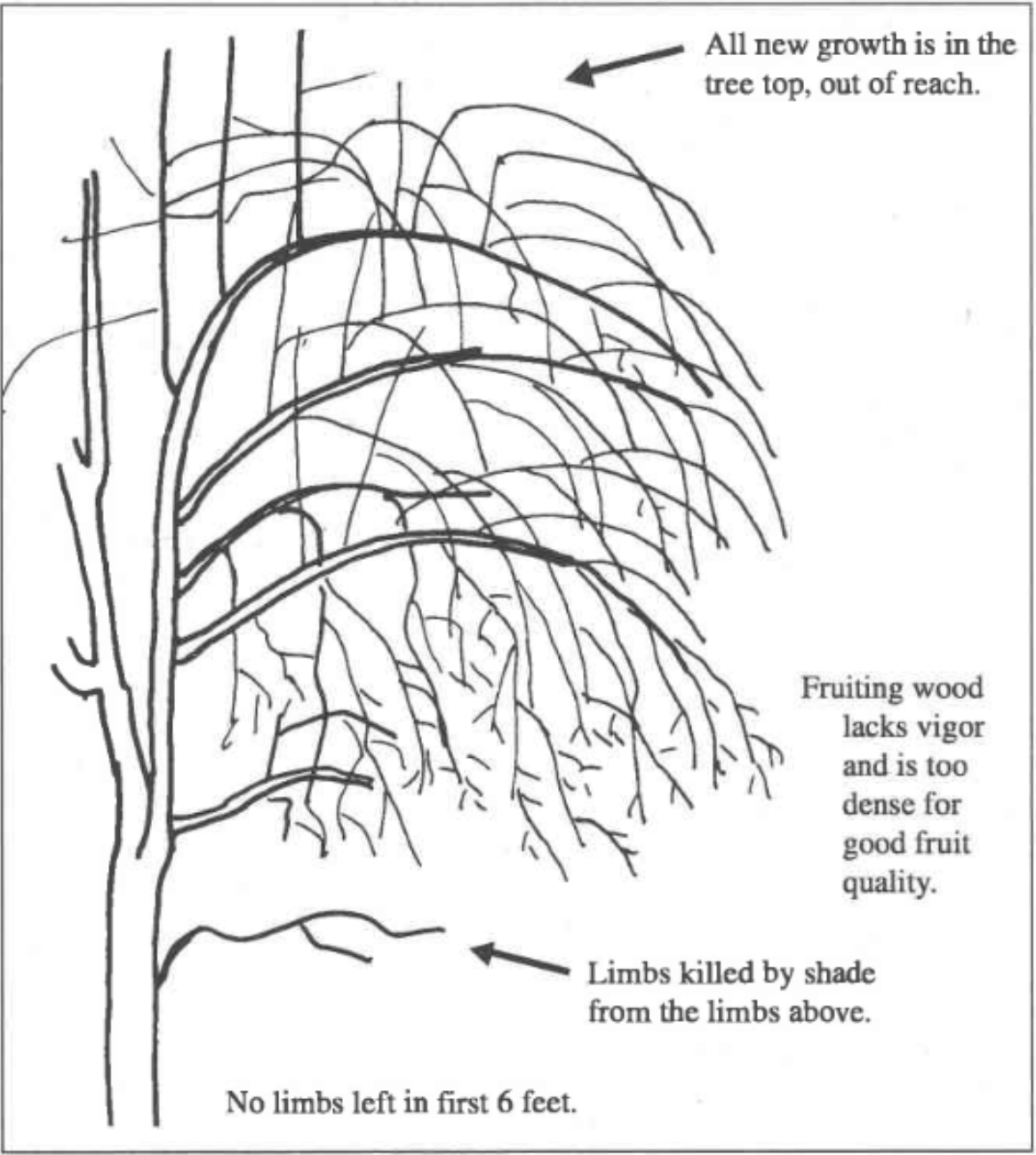 First year of restoration pruning. You'll need a 14-foot, 3- or 4-legged ladder for this job. It's definitely unsafe to try to restore an old tree on an inadequate ladder or-worse-by climbing the tree.

It will not be possible to do this pruning with a pole saw. Do not use a chain saw — the risk of bodily injury is too great. 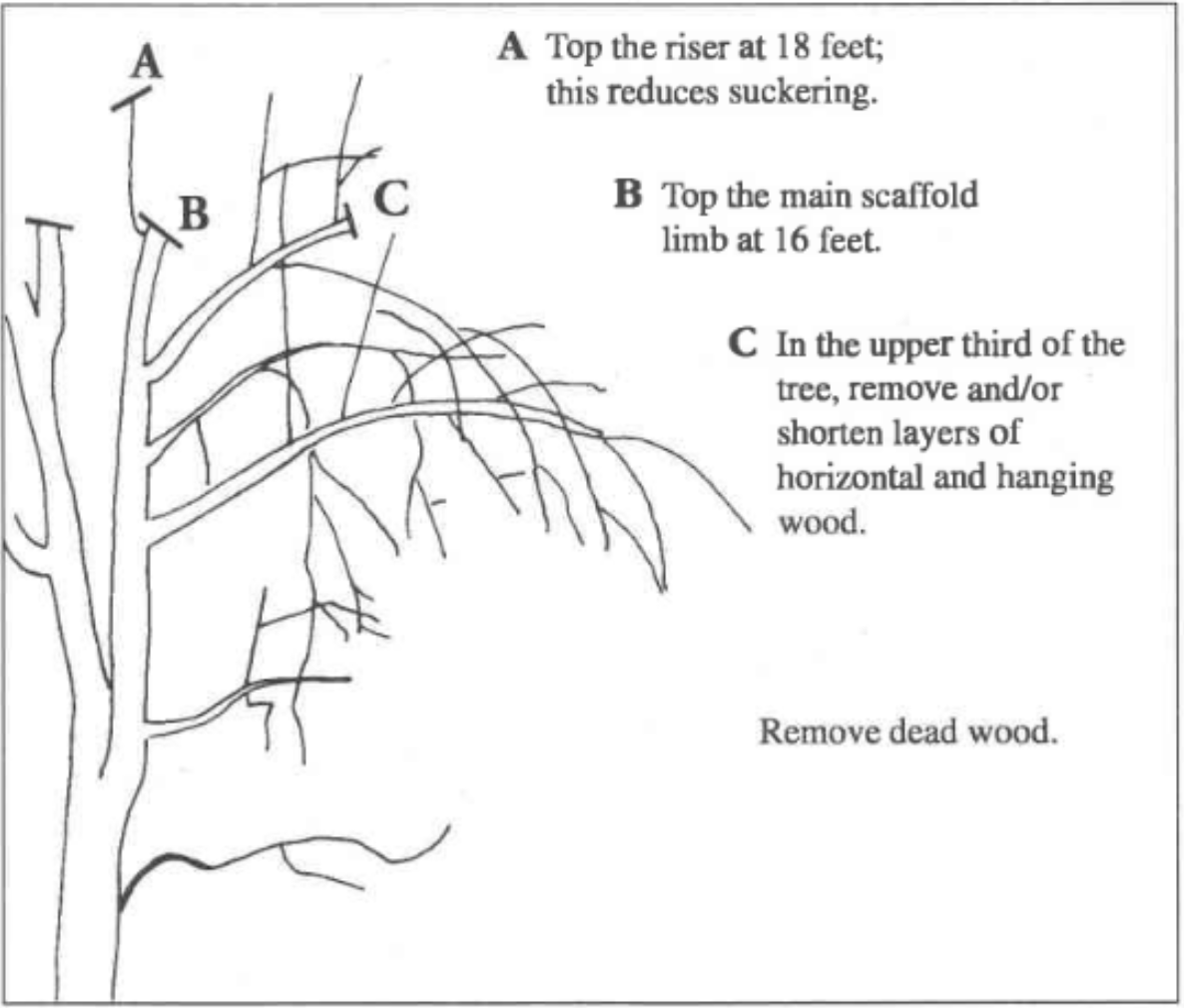 Before the second dormant pruning, check the results of your previous year's work and plan how to reduce tree height still further. Which limbs do you expect to be permanent? The limbs you leave above the permanent limbs will suppress growth on limbs below them. 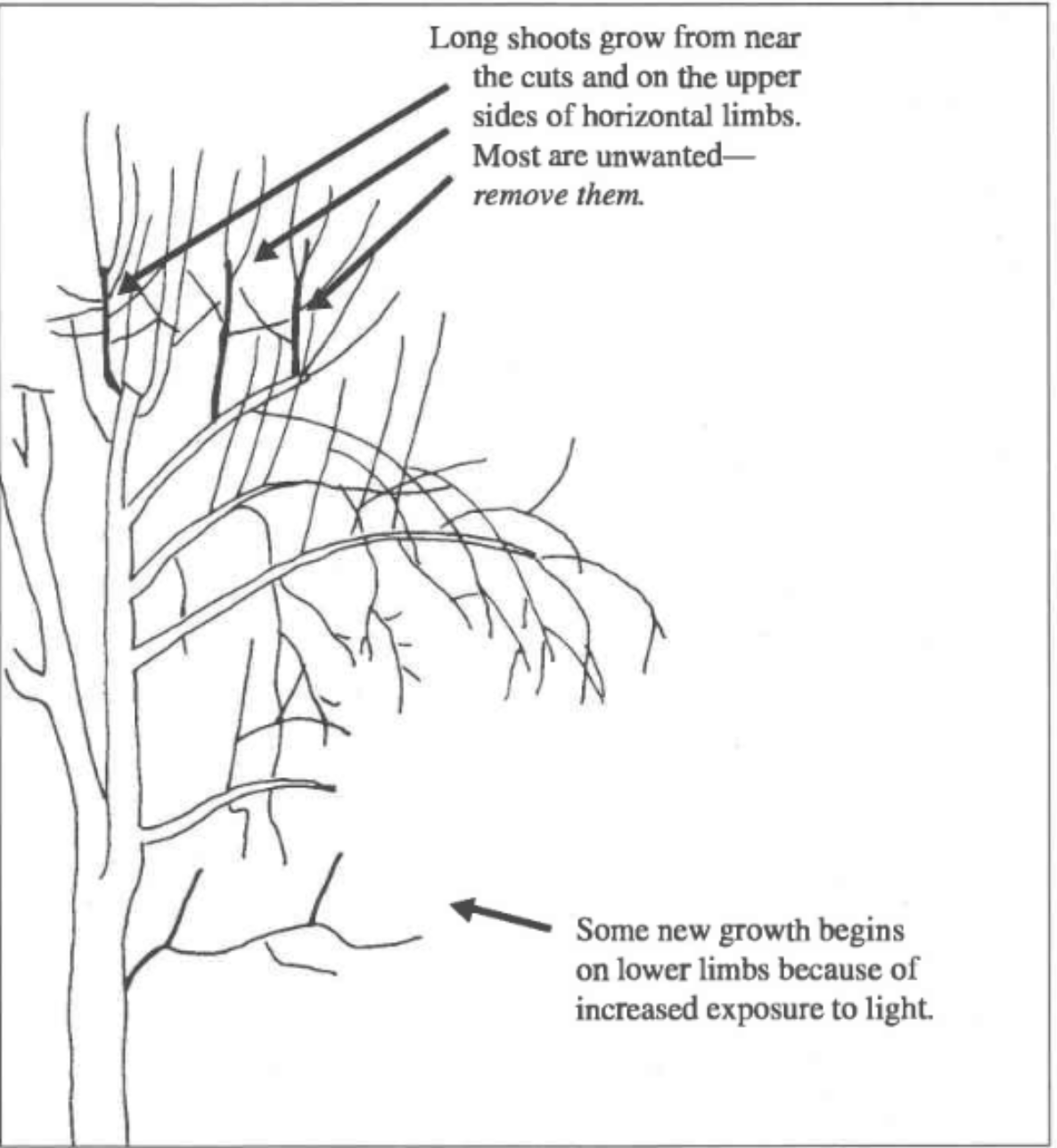 After the second dormant pruning, the final tree height has been established at 17 feet. Loss of lower limbs makes it hard to reduce the height more without excessively reducing yield. 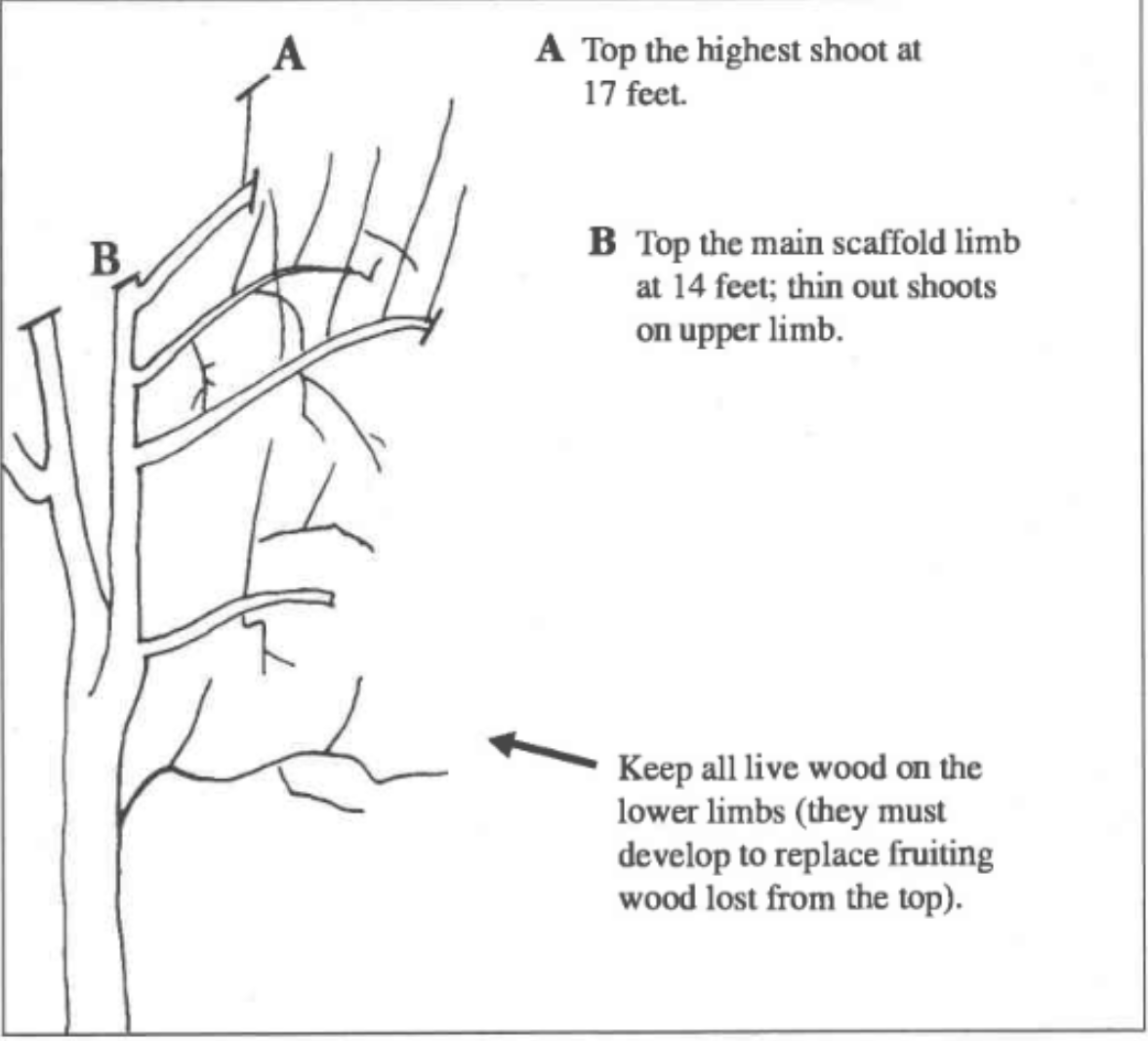 After the second dormant pruning, the final tree height has been established at 17 feet. Loss of lower limbs makes it hard to reduce the height more without excessively reducing yield. Check the regrowth after your second dormant pruning. Remove more than 50 percent of new growth in the top limbs, and redirect lower limbs upward by thinning to leave an upright shoot at the end of the branch.

After 4 years of intensive pruning, the tree is 17 feet tall. It has an 18-foot spread, a roundish-conic overall shape, well-developed lower limbs, and an abundance of young fruiting wood. 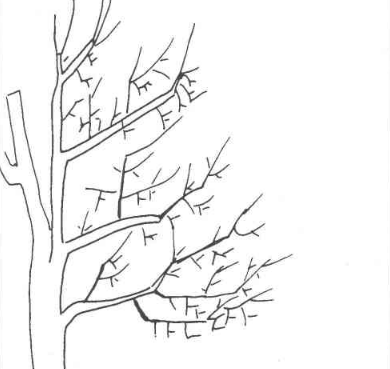 When all low limbs are already lost, dehorn the tree just above the crotch with sloping cuts. Train regrowth by dormant pruning to develop wide-spreading branches low on the tree. 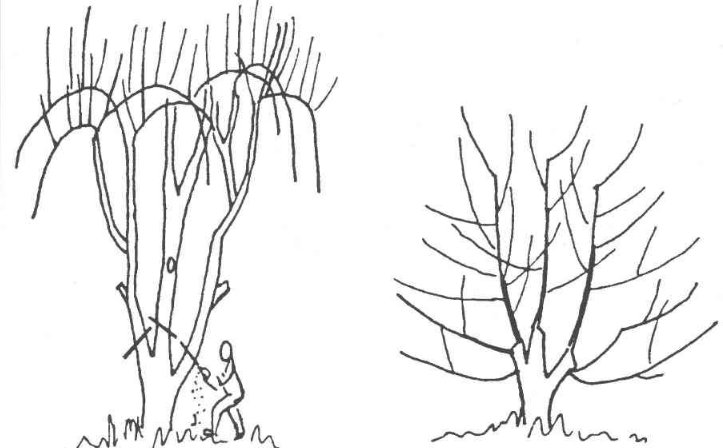 A stylized drawing of a secondary scaffold limb. Regrowth is 2 years old and branched (some apple varieties won't branch this readily).

The same limb, one season later, showing regrowth and change of limb position because of fruiting (former limb position in dashed lines).

Head branch 1 at A, to stiffen it and hold it in position

Prune branches 2 and 3 to outside laterals at points B and C.

Regrowth from point D is short because branches 1 and 2 suppressed it. 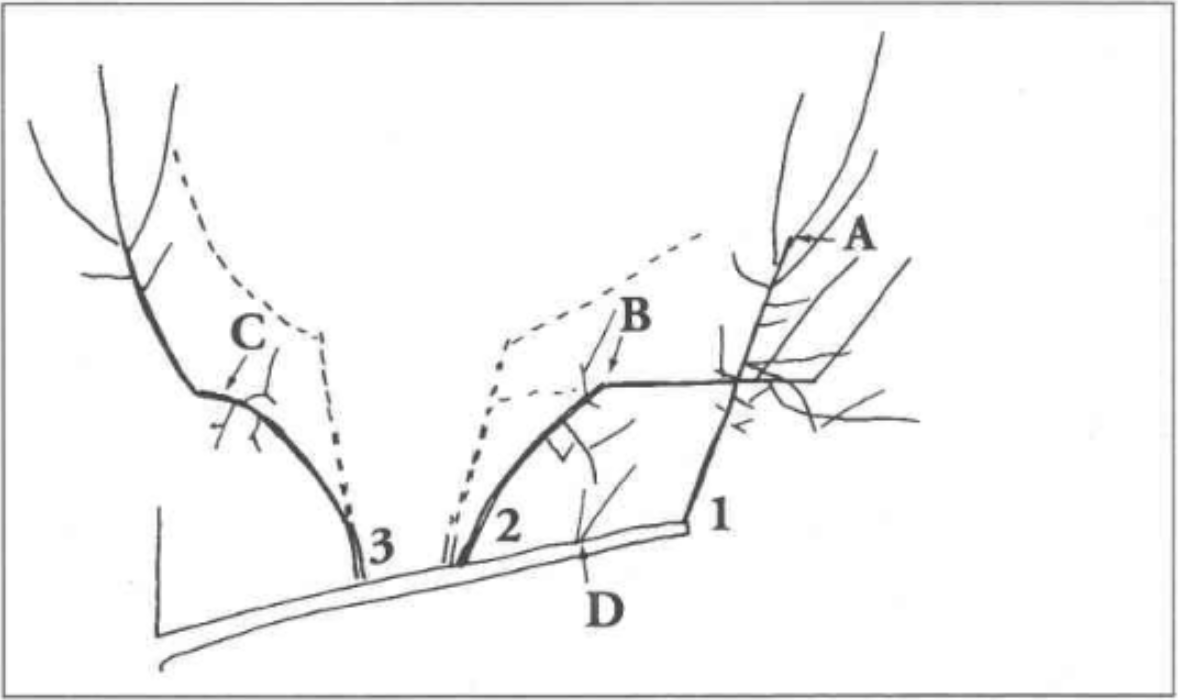 Cut back all three branches to single upright shoots; head branch 1 again, to stiffen it. This reduces growth of shoots below and helps to develop fruiting wood close to the secondary scaffold branch.

Note development of flower-bearing spurs at A and B on limbs 2 and 3. 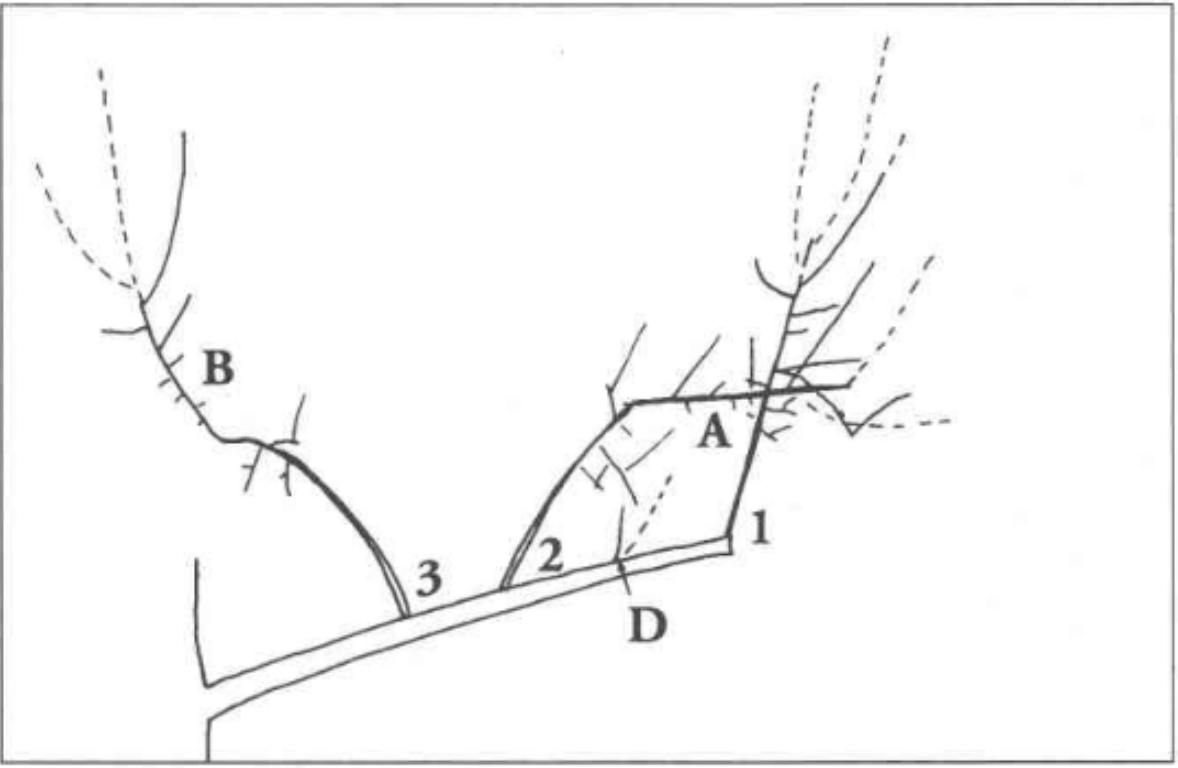 The same limb, four seasons after you started pruning to restore the old tree. Dashed lines show the wood you'll remove by pruning.

The ages of portions of branch 2 are labeled as follows (between arrows):

Remove completely the upright shoots at E and elsewhere, or leave them unheaded.

Remove portions A, B, and part C--they're too far from the secondary scaffold branch. They'll be replaced with shoots like those at point E when they form flower spurs.

On branch 1, which you headed every year to hold it in position, renew the fruiting wood by removing hangers (point I). 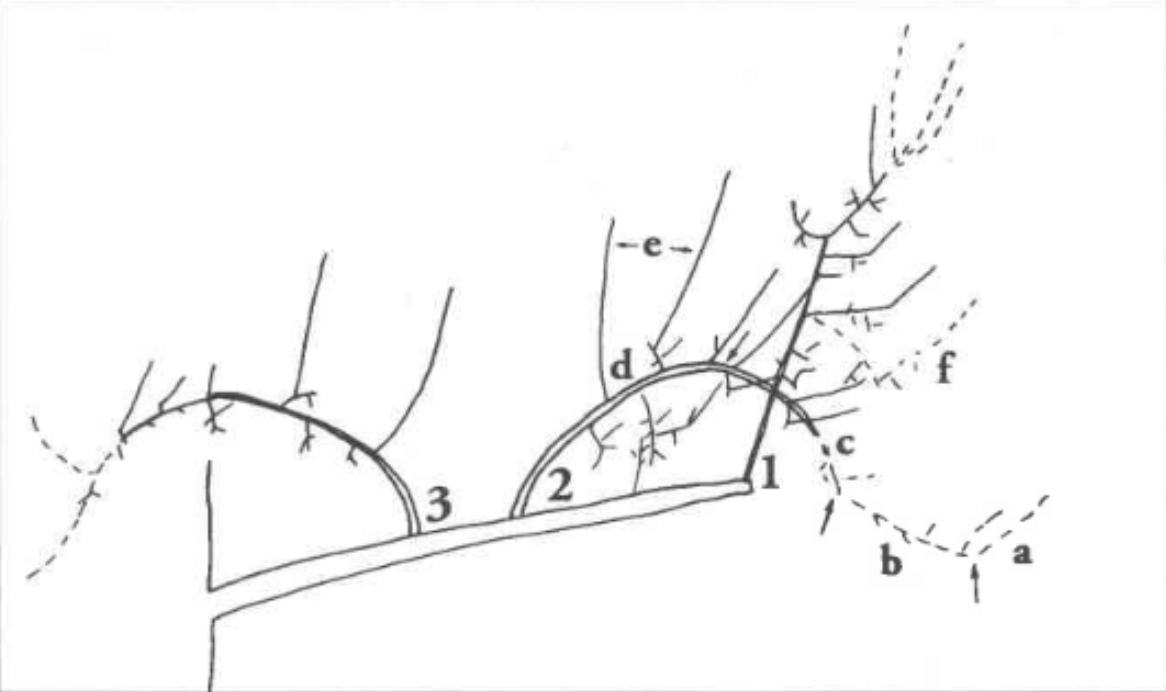 Dehorn — To prune a mature tree back to its main scaffold branches, usually done at a height of 6 to 10 feet.

Dormant pruning — Pruning during the time of year when the leaves are off the tree.

Heading a branch — Cutting off a part of a shoot or limb instead of removing the entire limb at its point of origin (which is called thinning).

Outside laterals — Slide branches on the periphery of the tree.

Riser — A young, upright shoot in the top of the tree.

Scaffold limb — The main limbs that form the framework of the tree.

Shoot — The length of branch growth in one season. The bud scale scars (ring of small ridges) on a branch mark the start of a season's growth.

Sloping cuts — Pruning cuts made at an angle to prevent water accumulation at the cut.