This guide lists recommendations for insect, mite and disease control in hazelnut orchards. The chemicals, formulations and application rates listed here are based on label directions, research and orchard experience.

Pest management depends on producers and their knowledge of the orchard and its characteristics. Producers must weigh several factors: cultivar, tree size, tree density, canopy characteristics, pest complex and pest history. Consider all these factors when choosing which chemicals to apply and at what rates. Other variables include the amount of water used per acre, and the method of application.

Trade name products are mentioned as examples only. Occasionally, manufacturers register different formulations of a product that contain a different concentration of active ingredient. This does not mean that OSU Extension either endorses these products or intends to discriminate against products not mentioned. Consult product labels to determine whether their use confers advantages over the products listed in this guide.

View diseases, pests and products by crop stage on a web-based app. 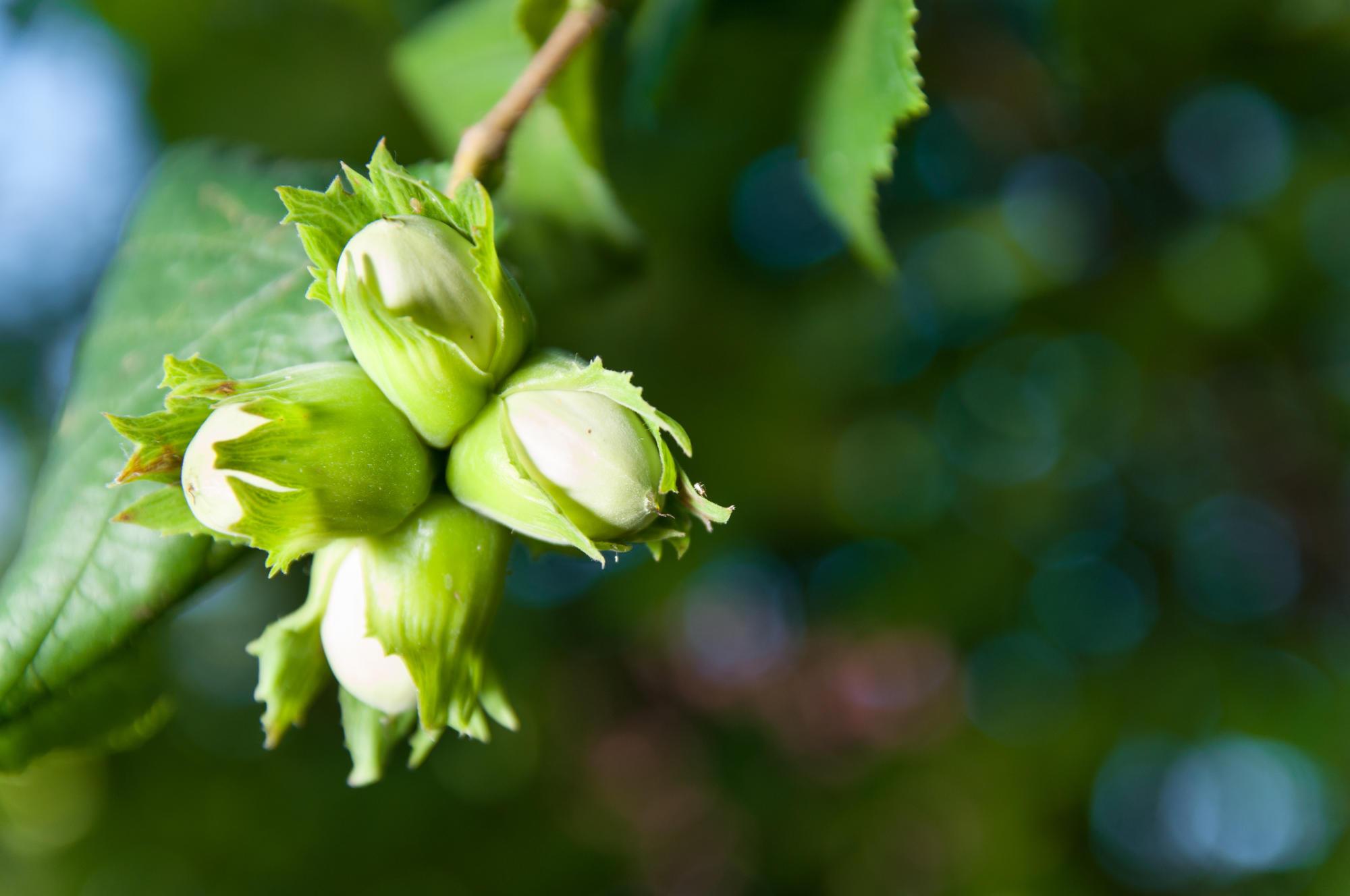 Always refer to the pesticide label for use instructions. It is the legal document.

Producers ask two common questions about the chemical control of insects and diseases:

The schedule below suggests an amount of formulated product to use per acre, and not the amount of active ingredient. This amount is based on a “typical” orchard of middle age and average tree density, with moderate pest pressure. Less product may be needed in 1- to 4-year-old orchards. Conversely, more chemical (within label limits) may be required for large, mature trees experiencing heavy pressure from multiple pests.

It takes less spray to get good coverage on an orchard with immature trees with limited canopy, but this does not affect the rate of application by volume. For most ground-applied applications, apply products in a minimum of 100 gallons of water per acre. For larger canopies, 150 to 200 GPA of water can improve coverage and efficacy. Always calibrate sprayers to tree size to improve coverage, reduce waste, and avoid drift.

CHECK THE LABEL BEFORE SPRAYING! Also:

Rotate pesticides by mode of action (group); do not become reliant on a single group for control.

Premix products may have reduced rates of active ingredients, and may contribute to development of resistance

Quick reference guide to herbicides labeled for use in hazelnuts

Fungicides have been useful to suppress or delay development of eastern filbert blight in an orchard of susceptible cultivars such as Ennis or Barcelona. Cultivars such as Jefferson or McDonald, with the single dominant gene for resistance only, need protection the first spring after planting, when located near heavily infected orchards. Fungicides will not remove or eliminate cankers from the tree.

Fungicides are best used to protect susceptible tissue in the spring at budbreak and for the next eight weeks. Most fungicides will last two weeks before another application is needed. This means a total of four applications, starting with the first at budbreak. Although hazelnuts are still susceptible after this period, additional applications have not resulted in consistent, significant disease control.

Because of fungicide resistance issues and resulting label requirements, you may not be able to use the same fungicide for all four applications. Since the EFB fungus has a long (two-year) life cycle, the resistance risk is already low relative to other diseases, such as powdery mildew. Strategies to further minimize this risk include alternating or tank-mixing fungicides with different modes of action. The Fungicide Resistance Action Committee has categorized, grouped and assigned numbers to the modes of action.

Alternating fungicides with different modes of action has been effective to manage EFB. Research has not identified any one alternating strategy as better than any other strategy. We have several fungicide groups to choose from, including FRAC groups 3, 11, M5, M3 and M1. It is suggested that the first application be chlorothalonil or ziram (group M5 or M3) followed by your choice of a Group 3 or Group 11 fungicide. Each of the next two applications would be different from the previous one. An example of this program might be to start with Bravo (or any of its generics, Group M5) at bud break, followed by Flint Extra (Group 11) two weeks later, then Tilt (Group 3) two weeks after that, and ending with Cabrio (Group 11). Use of multisite products such as chlorothalonil (Group M5), ziram (Group M3) or copper-based products (Group M1) for all four applications would also be acceptable.

Do not just alternate fungicides with different trade names, as they might have the same mode of action. Some fungicide premixes already combine two fungicides with different modes of action, generally a Group 3 and Group 11 fungicide. These products cannot be used for every application because they do not allow more than two sequential applications before switching to a different product with a different mode of action. If you use these premixes, you must use an M5, M3 or M1 fungicide in the rotation. An example of this program might be to start with Bravo (M5) at bud break, followed by Stratego (3 + 11) or QuiltXcel (3 + 11) two weeks later, then the same product two weeks after that, but ending with Bravo.

You can make your own tank-mixes. Since tank-mixing can be expensive, growers have asked about reducing the rate of each product in the tank. Research to date has shown that a half rate of Echo 90 DF (Group M5) tank-mixed with either Tilt (Group 3) or Cabrio (Group 11) is effective to manage EFB. Combining fungicide resistance theory and research on EFB in Oregon suggests we should use a half rate of chlorothalonil tank-mixed with a full rate of a Group 3 fungicide or a half rate of a Group 11 fungicide. An example of this program might be:

First application: A full rate of Bravo (M5) at budbreak

Third application, two weeks later: A mix of Tilt (3) at full rate plus Echo 90DF (M5) at half rate.

Research has indicated that addition of a surfactant provides better disease control than a fungicide alone. Numerous products can break the surface tension of water to get better coverage of plant tissue. They also can help keep the fungicide solution in contact with the plant, reducing wash-off during rain events. Unless otherwise stated on the label, add a surfactant with a fungicide. Copper-based products have traditionally been applied with a horticultural mineral oil. Newer fungicides may be mixed with silicone-based or nonionic surfactants. Be careful, as several fungicides may already come formulated with a surfactant and/or specifically say NOT to add these products. For example, do not add a surfactant to Bravo or Quadris Top.

Educate yourself about fungicide activity, mode of action, and class—as well as resistance management practices.

Start a fungicide program with multisite mode of action materials.

Information on plant protection is available from several sources at Oregon State University:

The single most important approach to pesticide safety is to read the pesticide label before each use and then follow the directions. If still in doubt after reading the label, contact a person qualified to help evaluate the hazard of the chemical and its use. Qualified people include Extension specialists, county educators, pesticide product representatives and retailers.

Pesticides are toxic and should be handled with care — but they can be used safely if you follow recommended precautions. Follow all label requirements, and strongly consider any recommendations for additional personal protective clothing and equipment. In addition to reading and following the label, other major factors in the safe and effective use of pesticides are the pesticide applicator’s qualifications, common sense and positive attitude. Always take all safety precautions when using pesticides.

In case of accidents involving pesticides, see your doctor at once. It will help your doctor to know exactly which pesticide is involved. The label on the container gives this information. Take to the physician the pesticide label or information from the label, such as the product name, registration number of the U.S. Environmental Protection Agency, common name and percentage of active ingredient and first aid instructions. If the label cannot be removed, take along the pesticide container (if not contaminated), but do not take it into the hospital or doctor’s office.

Emergency response for exposure and spills

For any pesticide exposure emergency, dial 911.

First aid for exposure is indicated on the pesticide label.

For information on poison emergency treatment call the National Poison Center at 800-222-1222.

Pesticide licensing and regulation — The Oregon Department of Agriculture regulates most aspects of pesticide use in the State of Oregon. Vall 503-986-4635.

Worker protection — The federal Worker Protection Standard for Agricultural Pesticides protects agricultural workers from pesticide exposure at work. The Oregon Occupational Safety and Health Administration is the state agency responsible for administering the WPS in Oregon. For information on WPS requirements for employers, call 800-922-2689.