Fire has been a part of almost all ecosystems in Oregon. Prior to Euro-American settlement, fires were started by lightning and by Indigenous people, and were common in some parts of the state while rare in others. When a fire starts, many factors shape its behavior — from how fast it moves to how hot it burns. These need to be understood when planning prescribed burns.

Prescribed burn practitioners pay close attention to fire behavior to make sure that they are achieving the objectives of the burn (See Planning a Prescribed Burn, EM 9343 and Prescribed Fire, Why We Burn, EM 9339). A burn shouldn’t be so intense that it kills desirable trees or risks getting out of the planned burn area. But neither should it be too cool, as it might not achieve the goals of the burn.

Section anchor "What is fire behavior?" 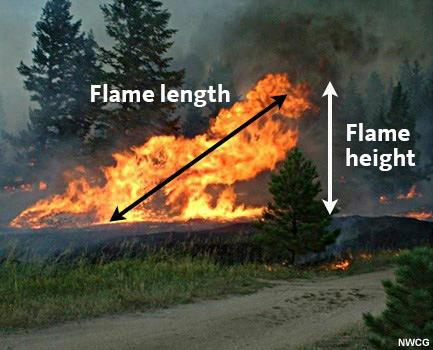 There is a difference between flame length (the distance from the middle of the flaming zone to the average flame tip) and flame height (which is easier to estimate visually). When there is no slope or no wind is present, flame length and height are equal. 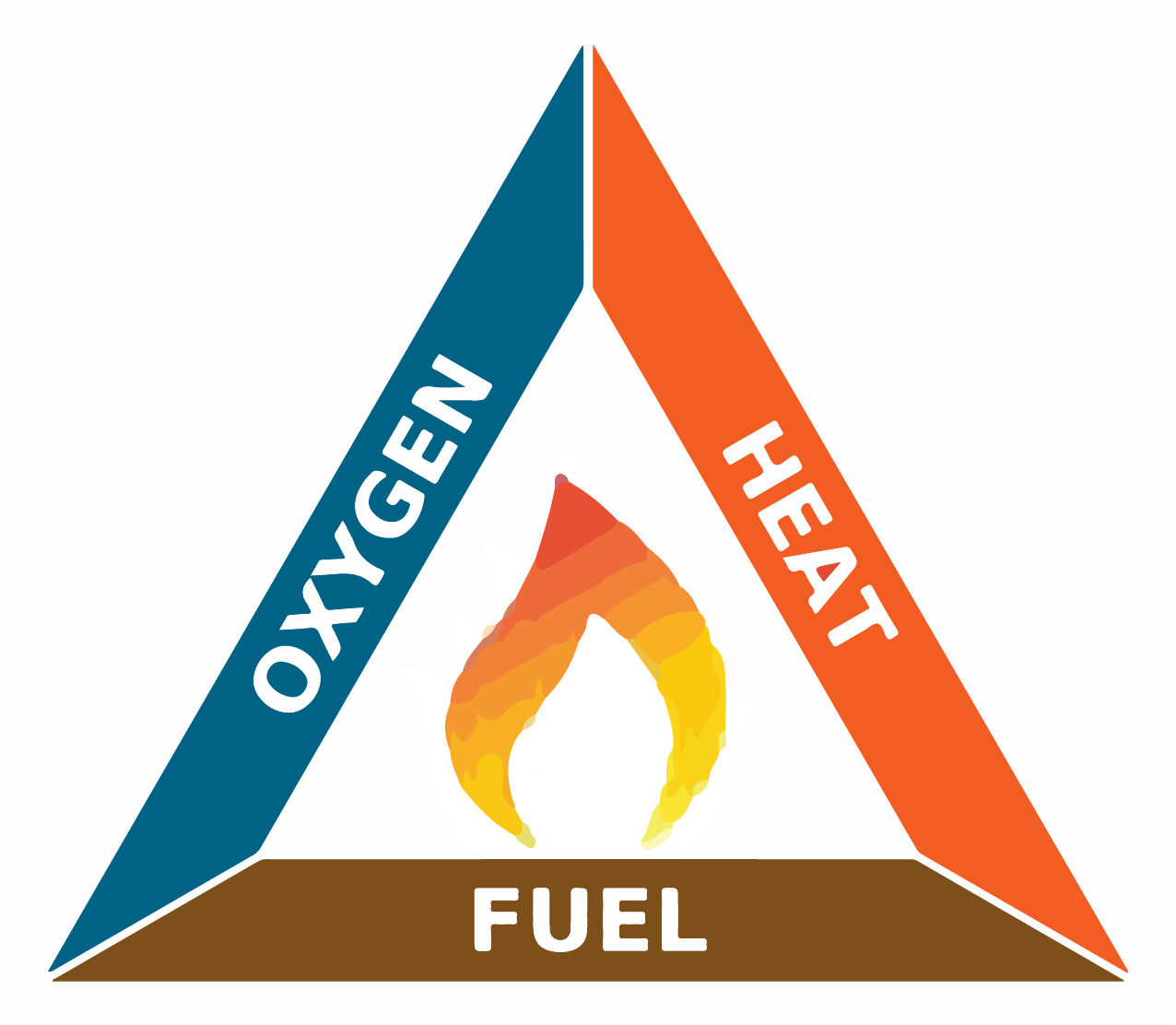 What is fire behavior?

Fire needs three elements to grow: fuel, oxygen and heat. A fire can sustain itself if these three elements are present, but the amount and condition of each will determine the behavior of the fire. More fuel, hotter and drier conditions, and wind to push oxygen toward the fire all increase fire behavior. Prescribed burn practitioners are always working with these three elements to manage fire behavior. For example, burners might remove fuel to create control lines, spray water to cool the fire or use tools like flappers that smother a fire by depriving it of oxygen. These actions help alter fire behavior during the burn to achieve the intended management goals. Some of the most important aspects of a prescribed fire are to conduct the operation safely and manage the fire behavior to positively affect the landscape.

The impact of a fire on an ecosystem is called severity. The severity of a fire in a forested ecosystem is often described as the proportion of the trees killed and the impacts on the soil. Crown fires that kill most of the trees are typically referred to as high-severity fires, while surface fires that kill few trees are called low-severity fires. Where woody vegetation is present, severity is a common way of describing the effects of fire behavior, because because a common objective of prescribed burning is to kill a specific proportion of the small trees and shrubs on the site. Prescribed burn practitioners consider all the elements that affect fire behavior to avoid killing too many (or too few!) trees and shrubs.

It is important to assess or quantify the key elements that affect fire behavior: fuel, topography and weather, known as the fire behavior triangle.

Live and dead vegetation that is consumed during a burn is referred to as fuel. The amount of fuel is an important factor in determining the expected fire behavior during a prescribed burn. In forests where fire historically burned every few years, fuel levels remained low. Fire prevented dead vegetation from accumulating and created gaps by consuming trees and shrubs. 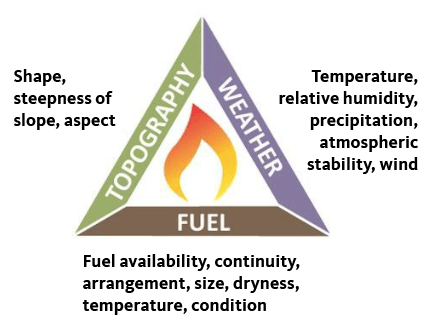 Because there wasn’t much fuel to burn when fires were frequent, fire intensity was low and fires burned at low severity, killing few trees. Generally, fires are more severe where they are infrequent and less severe where they are more frequent. Prescribed burners assess the amount of fuel present to anticipate the behavior of the fire. Mechanical work is sometimes needed to lower the amount of fuel to acceptable levels.

The amount of fuel is one aspect that affects fire. The size of fuel is also an important consideration in a prescribed burn. Smaller pieces heat up faster and burn faster, while larger pieces are harder to ignite. In prescribed burning, the difference between these fine fuels (called 1-hour fuels) and larger fuels (10-hour and 100-hour fuels) becomes very important. Fire moves much faster in fine fuel like grass than in shrubs, but it also doesn’t last as long. On the other hand, flame length is greater in shrubs, even if fire moves slower.

Fire moves much faster in fine fuel like grass than in shrubs, but it also doesn’t last as long. On the other hand, flame length is greater in shrubs, even if fire moves slower.

When shrubs are arranged in a way that enable fire to travel up into nearby trees, they are called ladder fuels. Ladder fuels can make it more likely for a fire to spread from the ground to the tree canopy, which can cause torching of single or small groups of trees or a crown fire. Prescribed burns are usually not carried out in weather conditions that make a sustained crown fire possible.

The amount of moisture in the fuel is also important. Fires burn more intensely when fuels are dry. Longer flame lengths, faster rates of spread and greater heat can be expected. In some cases, moisture levels are different in fuels of different sizes. This is because by definition, 1-hour fuels dry out (or get wet) faster than 10-hour or 100-hour fuels. A short period of sunshine after heavy rains can dry out grass and pine needles, while logs and large sticks remain moist inside. Prescribed burners can use this to their advantage if they want to limit the intensity of the burn by burning when finer fuels will be drier and “available” to burn, but larger fuels are moist and less likely to ignite.

Topography refers to the shape and configuration of the landscape. Fire moves in different ways across the landscape in response to several topographic elements: steepness, aspect and the shape of the slope. When fire moves uphill, it preheats the vegetation above and tends to spread much faster and be more intense. Conversely, when fire is moving downhill or backing into the wind, the spread is slower and less intense because there is less preheating of the fuel. In wildfire situations, high-severity burn patches are much more common on steep slopes. This is the reason prescribed burn practitioners typically start at the top of the hill and work their way down when igniting, since this leads to lower fire intensity.

Aspect refers to the direction the slope faces. Slopes that face south get more direct sunlight and tend to be hotter and drier. Fire severity can be higher on south-facing compared to north-facing slopes for this reason.

There are three main aspects of weather that affect fire behavior: wind, temperature and humidity. Wind pushes a fire along, preheating the vegetation in front of it. This is similar to the effect of slope, and much like slope, it is important when planning a prescribed burn. Typically, prescribed burns start on the upwind side and then work their way toward the downwind side. Just like burning down a slope, this is meant to keep fire intensity low.

High temperature and low relative humidity also increase the intensity of a fire. These conditions dry out the fuels, and drier fuels ignite faster and burn more completely. 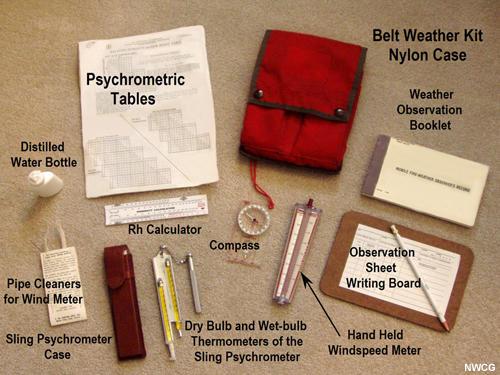 Contents of a belt weather kit.

Temperature and humidity change throughout the day, so choosing the appropriate time to light a prescribed burn can make a big difference in the outcome. During a prescribed burn, there is always someone monitoring weather and communicating observed changes to others on the fire. During large prescribed fires, agency meteorologists may assist in monitoring large-scale weather trends.

Parts of a fire

Fire behavior also changes in relation to its location within the fire. When a fire spreads out from an ignition point, it will usually be more active particularly if moving upslope or with the wind. In this direction, flame lengths are longer and the rate of spread is faster. This is called the “head” of the fire. On the opposite side, where the fire is spreading into the wind or downslope, flame lengths are shorter and the rate of spread is slower. This is called a “backing fire.” To the sides, the behavior of the “flanks” of the fire will be in between the intensity of the heading and backing parts of a fire. Prescribed burning incorporates carefully planned ignition patterns that will use the different behaviors of the fire to achieve the objectives of the burn.

Section anchor "Putting it all together"

Putting it all together

Prescribed burners spend a lot of time observing fuel and weather conditions. They use changes in weather throughout the day and the season to choose the optimal time to burn. In many cases, it is important to alter the fuels before a burn, by thinning small trees and shrubs, raking around sensitive trees or other resources, or removing ladder fuels. When it is time to light, they carefully match the pattern of ignition to the fuel condition, weather and topography so that when the fire spreads, the intensity matches the objectives of the burn plan (See Planning a Prescribed Burn, EM 9343). Gaining experience with how fire behaves in different fuels and under different weather conditions is important for successfully planning and implementing a prescribed burn. 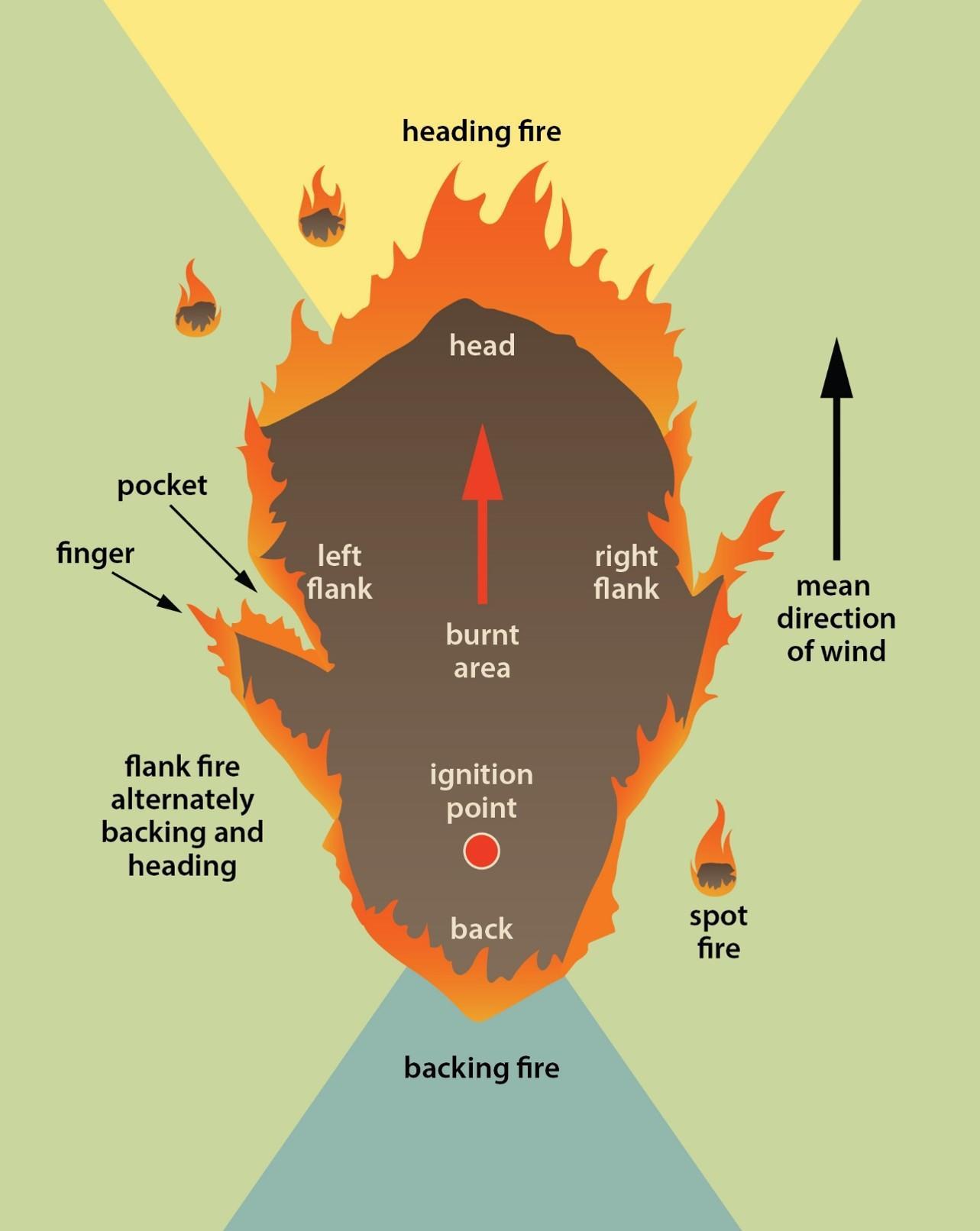 Parts of a fire.

This publication is part of a series developed by the Forestry and Natural Resources Extension Fire Program. The program would like to acknowledge contributions from Emily Jane Davis, Fire Program director and associate professor; Stephen Fitzgerald, Extension specialist and professor; and Aaron Groth, coastal regional fire specialist.