Together, three laws — the Morrill Act, the Hatch Act, the Smith-Lever Act — established the three cornerstones of the land-grant mission: education, research, and extension.

The development of Oregon’s land-grant university, experiment stations and extension service also happened within the context of other acts nationwide. 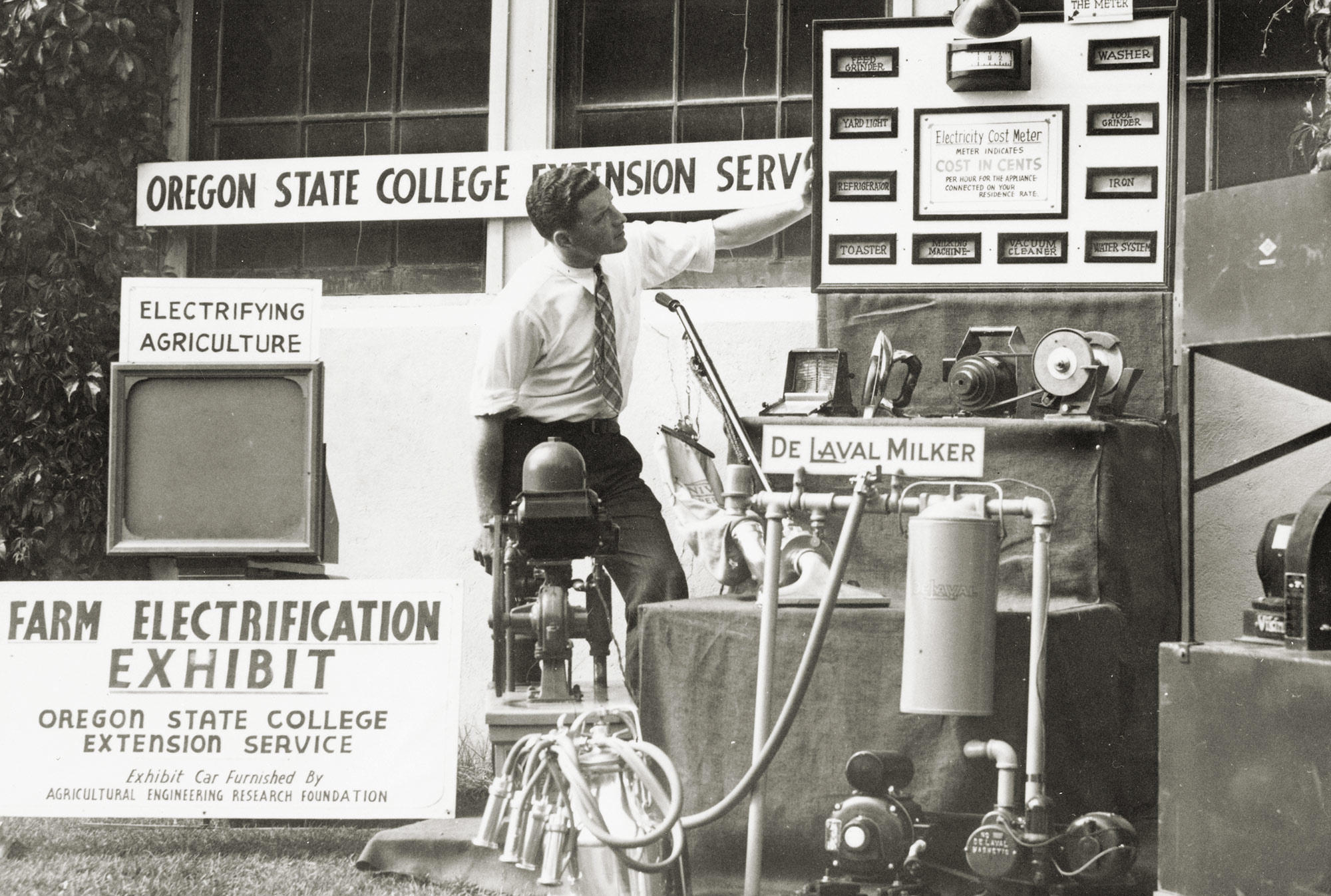 The Morrill Act, signed into law by President Lincoln, created land grant universities in every state. Under the act, the federal government seized nearly 11 million acres of land from 250 sovereign tribal nations — including 90,000 acres in Oregon — with little or no compensation.

Corvallis College, now Oregon State University, became the state’s official land grant institution. OSU gained and then sold the land granted to the university for 117 times what the U.S. had paid tribes for it, using the profits to fund development of the university.

The Hatch Act was passed to establish research farms where universities could conduct research into agricultural, mechanical and related problems faced by many rural citizens. In the same year, the Dawes Act divided Tribal lands among individuals. Native Americans were expected to assimilate by taking up settler American agricultural practices and giving up their own long-time practices.

The Oregon Agricultural Experiment Station began research activities in 1888 and was formally established in 1889. Farmers' Institutes (forerunner to the Extension Service) started with the first being held in Corvallis in 1888, and in the spring of 1889 was held in Salem, Roseburg, and Hillsboro to spread research and academic knowledge to many Oregonians, especially rural Oregon.

Second Morrill Act passed by Congress, which granted funds to those states with land grant colleges. The legislation also provided funding for Historically Black Colleges and Universities. The Agricultural College of Oregon, now Oregon State University, became a national leader in gender equality by being one of three land grant institutions in the nation to open up access to scientific courses to women.

Farmers' Institutes extended to include field demonstrations in farm operations.

College professors traveled throughout Oregon giving lectures from railroad cars provided by the Southern Pacific and the Oregon Railway and Navigation railroad companies.

Faculty worked off campus so often that a recognized division was established dedicated solely to the educational service of communities beyond campus. On July 24, the Board of Regents established the Extension Service at Oregon Agricultural College, now Oregon State University.

First county-funded agricultural Extension agents in Oregon were hired in Marion and Wallowa counties. Extension programming was designed for specific audiences within the agricultural community, especially new land-owning farmers and their families.

In response to World War I, USDA funds provided total support for Emergency Food Agents to encourage accelerated food production through victory gardens and crop production to meet wartime demand. Oregon started Extension 4-H clubs for kids in urban areas, and in the City of Portland converted part of the school grounds to victory gardens.

Extension organized the first of a series of statewide economic conferences, followed by county-based conferences to define the direction of Extension education in Oregon.

Extension initiated the use of radio to broadcast education programs throughout the state and celebrated a power boost to 500 watts in 1925 to cover the entire state.

Following the creation of the Oregon State System of Higher Education, all extension activities across Oregon’s public universities were combined into one General Extension Division.

Another World War challenged Extension to increase farm production and, at the same time, promoted victory gardens, homemade clothing and food preservation. Extension in Oregon organized temporary workforces of women and children and recruited Bracero agricultural workers. Japanese-American Oregonians and students were forced into internment camps or joined the military.

Termination of trust relations in Public law 587 and 588 benefited the forest industry in the region at cost of lands and recognition to tribal communities, who worked to win restoration decades later.

The partnership between the Confederated Tribes of Warm Springs and Oregon State University began. A formal Memorandum of Understanding between the University and the Tribes supported the Extension program.

Boom times began for Oregon’s forest industry and research within OSU’s College of Forestry. Until then, forestry had been a secondary assignment for a handful of agricultural agents. Nearly 20 percent of all Oregon school children were enrolled in Extension 4-H clubs, two-thirds from urban and suburban families.

The first OSU Extension agent hired to serve people in the coastal fishing industry. Oregon courts ruled that Yakama, Warm Springs, Umatilla and Nez Perce tribes were entitled to a "fair share" of the fish runs and the state was limited in its power to regulate treaty Indian fisheries only when "reasonable and necessary for conservation."

OSU was one of three universities in the nation selected to participate in the new Sea Grant program, which officially began in 1971.

OSU Extension expanded its forestry faculty to deliver training in woodland management and to extend the research to the new Christmas tree production industry. Also, federal and state policies began to focus on protecting existing wetlands, which meant a shift from prior dredging practices that eliminated these environments at a loss of sensitive ecosystems and in favor of agricultural lands.

The National Agricultural Research, Education, and Teaching Policy Act augmented the Cooperative Extension System to include Historically Black Colleges and Universities. This provided additional funds to ensure that the land grants were open to all citizens regardless of race.

Alberta B. Johnston became Deputy Director of the OSU Extension Service. One of her goals was to recruit a more diverse staff because the population of Oregon was changing. Leo Whitlaw was the first Black 4-H agent in Oregon during this time. Extension also conducted diversity reviews and cultural training in counties.

USDA issued a Civil Rights Action Team Report and offered advice for overcoming past injustices against women and farmers of color.

The Department of Extension and Experiment Station Communications won 13 awards at the annual meeting of the Agricultural Communicators in Education (ACE), more than any other of the 700 member organizations.

Oregon State University placed Extension within the Division of Outreach and Engagement.

Open Campus pilot launched in Crook and Tillamook counties to address unmet needs in communities related to college and career access and community development. It expanded a way for communities to access the university’s resources and to further advance OSU’s land grant mission through new educational partnerships and programs.

OSU Extension recognized its centennial with a celebratory look at its 100 year history.

The Oregon Legislature designates OSU Extension as the administrator for the statewide Outdoor School program, which provides the opportunity for a hands-on week of science-based outdoor education in fifth or sixth grade to every Oregon public school student.

OSU Division of Outreach and Engagement launched an initiative that created a new position to support OSU Extension in establishing the office of diversity, equity and inclusion.

OSU Extension launched a new centralized website as part of a digital engagement strategy, and in 2022 provided a Spanish version of the full website and its main social media account. 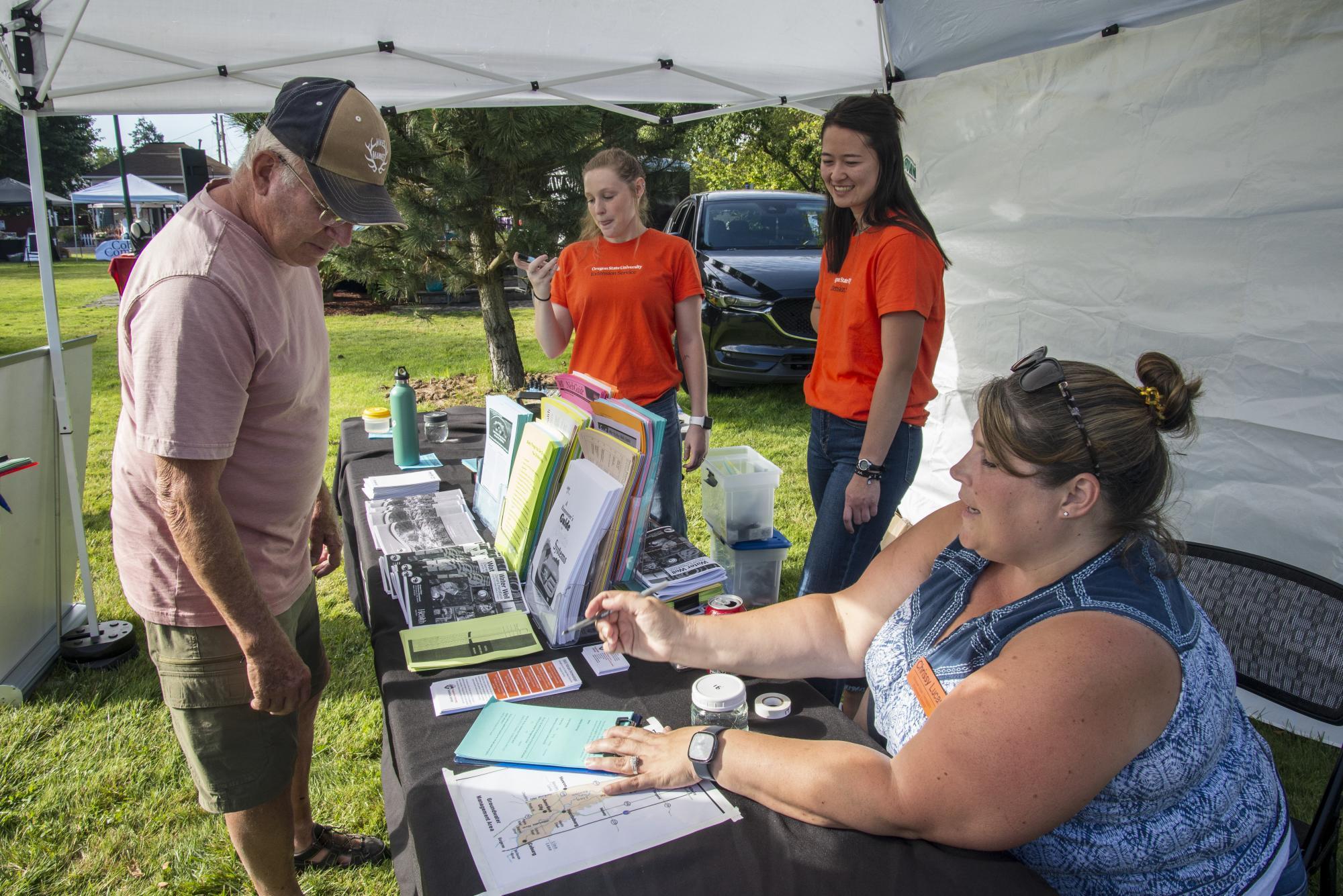 Today, Extension plays a significant role in non-formal educational outreach across rural, urban, and suburban settings – reaching and engaging people where they are. Time and time again, when there’s been a need for a trusted local partner, a statewide network and an unbiased, science-backed perspective, we’ve answered the call.

We do this work with consideration for the needs of historically marginalized communities, knowing that an equity focus uplifts everyone and makes for stronger communities and a stronger Oregon. We recognize that all Extension work occurs on Indigenous homelands. We have a responsibility to understand the continuing impact of this shared history, to recognize the Indigenous people who are part of our Extension community today and to ensure we act in ways that build toward a better future.

Serving as a trusted resource for communities

Over the years, our mission has endured: to help every Oregonian thrive while staying true to our focus on improving lives and livelihoods and helping Oregon’s environments and economies prosper. Through a strong USDA partnership and federal, state and local funding, this public/private partnership enhances the reach and inclusion of this extensive network of outreach and education, serving as a trusted resource for communities.

Extension of tomorrow will continue to respond and adapt to an ever-changing technological, environmental and community landscape to bring the latest science-based information and outreach education to people across the state and beyond. OSU Extension is out there serving Oregon, and we are here for you.