Fire has always been an integral part of the health of Oregon’s ecosystems. By observing fire’s effects, people have learned that they can use it for specific results on the ground. The practice of intentional burning is called prescribed burning. Native American practitioners call it “cultural burning” when it is used to meet cultural goals. The objectives behind prescribed burning are diverse and include:

People use prescribed fire for different purposes in different regions of Oregon. Differences in local ecology, management priorities and historical use call for different approaches. 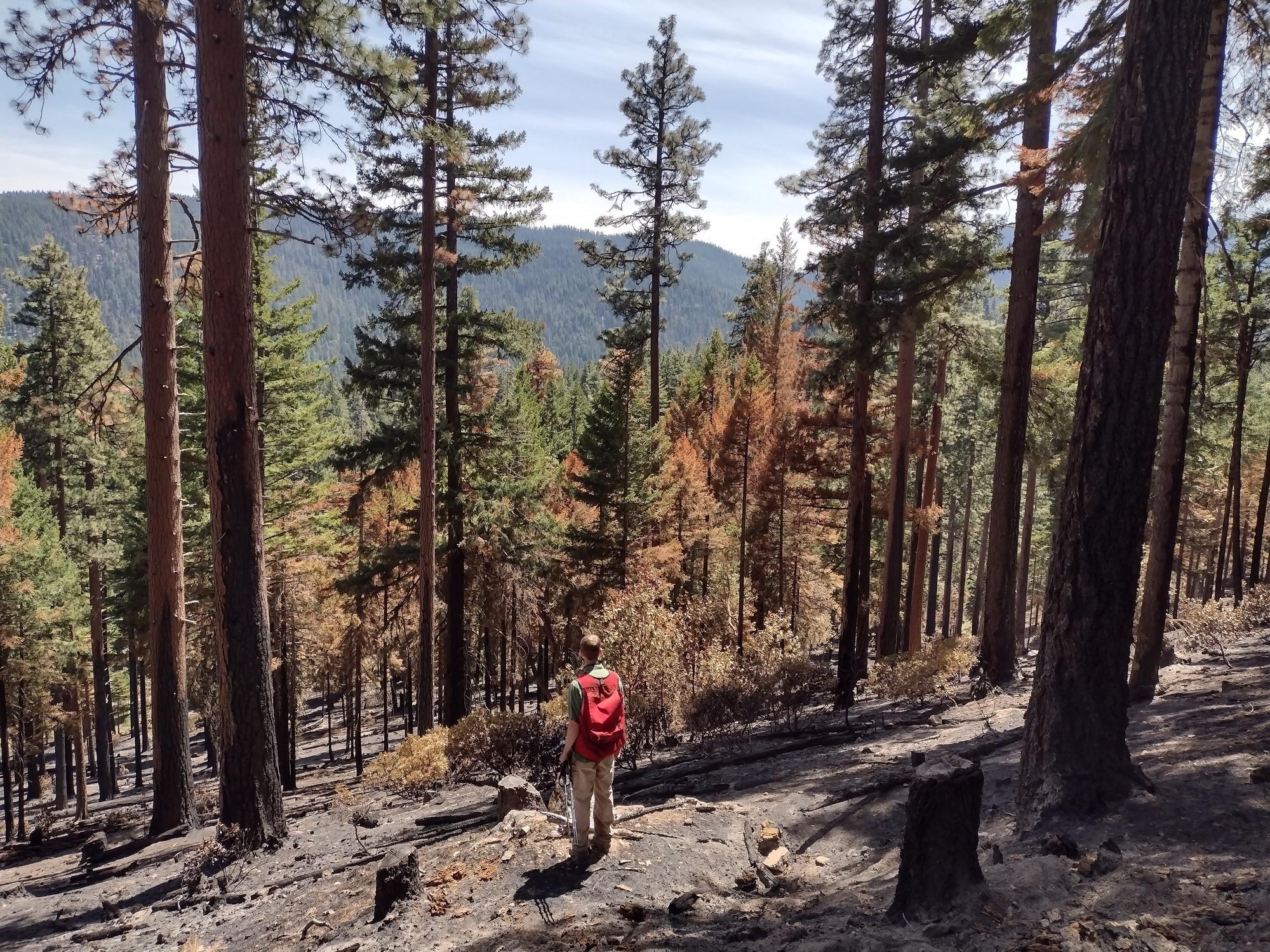 History of prescribed burning in Oregon

Fire has long been used in Oregon for a variety of purposes. Native Americans have used fire to influence landscapes across the state for millennia. Some goals of cultural burning include:

Early settlers learned about the use of fire from Native Americans and adopted the practice to manage rangelands and forests. Ranchers in some regions use fire to keep woody plants from invading pastures and to improve forage quality. Fire has also been used in timber harvesting and forest management. In the western part of the state, fire has been used to reduce fire hazards created by slash left after logging. Underburning was reintroduced in the eastern Cascades as a forest management tool in the 1960s and 1970s.

Today, people use prescribed burning for many ecological, economic or cultural reasons. Some common objectives include:

Burning reduces dead fuels in the understory of mature forests and after timber harvest. Burning also reduces “fuel ladders” — shrubs and small trees that could help wildfire reach tree canopies. Shrubs growing into grasslands can also increase the intensity of a fire. Prescribed fire can reduce the intensity of wildfires by removing fuel. Reducing the intensity of wildfires helps ecosystems recover. It also minimizes the economic losses from destroyed infrastructure and timber. While prescribed burns are not intended to stop a fire outright, burned areas can help firefighters safely prevent further spread. This is particularly true for prescribed burns in strategic areas — along ridges, next to roads and around communities. 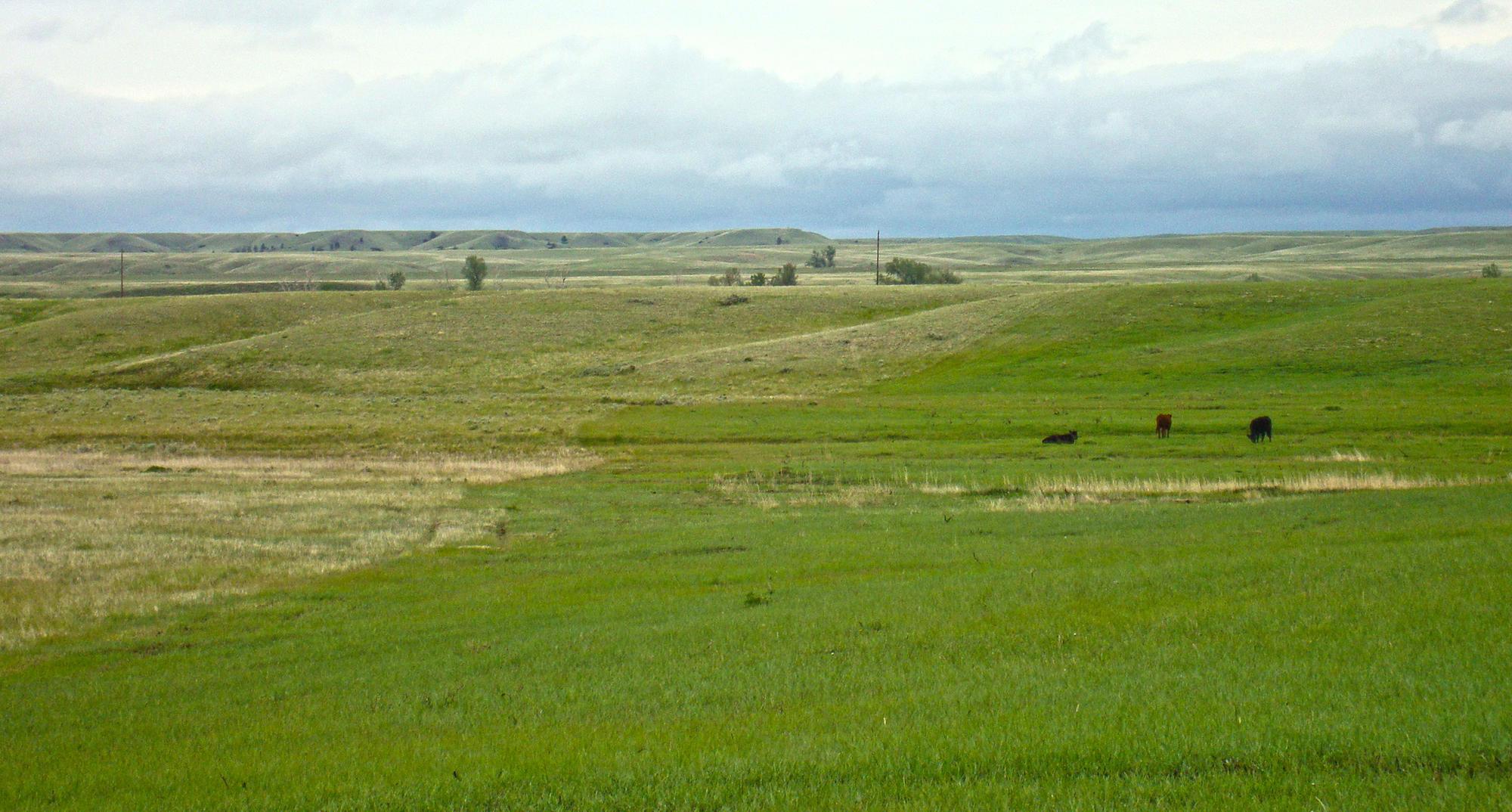 Greenup after a prescribed rangeland burn.

Reducing damage from insects and pathogens in forestlands

Lack of fire benefits many forest insects, such as bark beetles, Douglas-fir tussock moth and western spruce budworm. This is especially true when increased tree densities create stressful conditions. Dwarf mistletoe can also be a problem under these conditions. Prescribed burning can reduce tree densities and increase water and nutrients for remaining trees. Healthier trees are more resistant to insect and disease outbreaks. Burning felled or piled trees may also control insects or mistletoe in those trees before they spread to new hosts.

Burning in wildland-urban interface areas reduces the risk to nearby homes, while enhancing the health of natural areas, such as this oak woodland.

In addition to helping trees resist drought, insects and disease, burning also helps to restore healthy ecosystems. Open stands of fire-adapted trees feature a higher diversity of plant life in the understory. Fire tends to leave patches of shrubs and trees, open areas for sun-loving species, and denser patches where it burns less intensely. This diversity is important to many species of plants and animals. See The Ecological Effects of Fire, EM 9340. 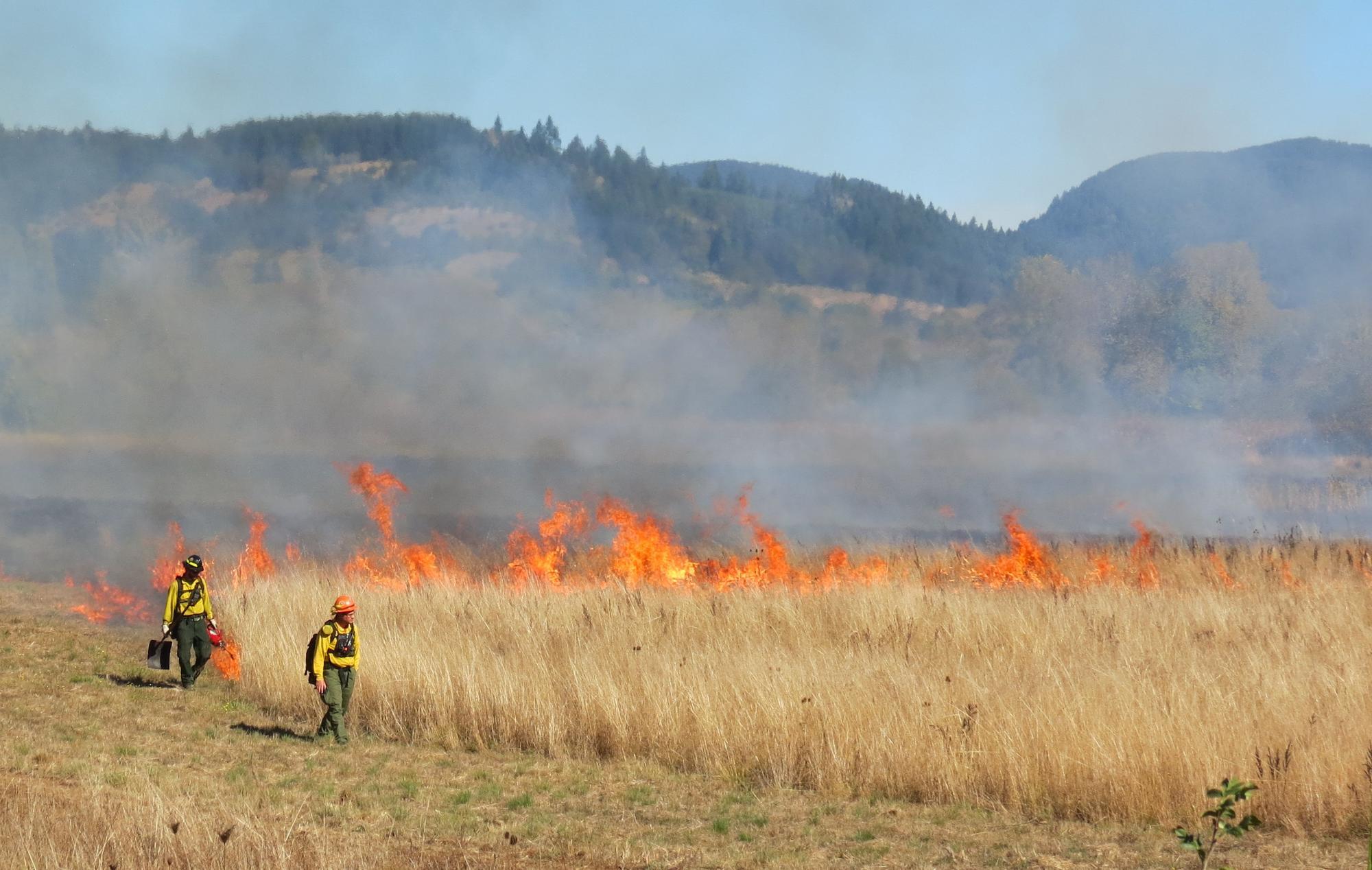 Prescribed burns are used to enhance habitat for rare species. Firefighters from the U.S. Fish and Wildlife Service and the Confederated Tribes of Grand Ronde burn a remnant wet prairie in the Willamette Valley.

Fire suppression has reduced habitats, threatening many rare plants in Oregon. Prescribed burning can help restore these habitats. Grasslands, meadows and open forests are particularly important for rare plants in several parts of the state. This is an important reason for prescribed burning in places such as the Willamette Valley and coastal headlands. Plants in these places — like Bradshaw’s lomatium, Kincaid’s lupine and Cascade Head catchfly — depend on fire to maintain their habitats.

Fire is an important mechanism for promoting wildlife food sources. Following a fire, grass and shrub sprouts are generally more nutritious. Flower and fruit production also increase in some species after fire. These changes can benefit pollinators and herbivores such as deer and elk. Dead trees turn into “snags,” which are important for many bird species. The space that opens up after fire can make it easier for predators — such as owls, hawks and bats — to travel and hunt. Reducing the likelihood of large, high-severity burn patches can also help maintain fish habitat by reducing erosion into waterways and maintaining riparian forests. Promoting wildlife habitat is an important motivation for Indigenous people, who burn meadows, marshlands and oak woodlands for this purpose.

Prescribed fire supports resilient watersheds. It is critical to the health of many municipal water catchments. High-severity fires within municipal watersheds can seriously impact water quantity and quality.

Because of changes in the climate, extreme weather events are becoming more common. Under these hotter and drier conditions, forests tend to burn at higher severity. Increased drought stress after such fires can limit regeneration. In some cases, an area will burn again before trees can mature. Prescribed burning reduces competition and drought stress in trees, and decreases the likelihood of high-severity fires. This helps forests adapt to a changing climate.

Indigenous fire practitioners use fire to produce quality basketry materials such as beargrass, hazel and willow. They also use fire to maintain habitat for food and medicine plants such as camas, tobacco, buiscuitroot and huckleberries. Cultural burning supports wildlife habitat and plays an important part in the traditions, culture and sovereignty of tribes. Tribal burning practices in Oregon today are diverse. They range from small, family-oriented burns focused on single cultural species to large-scale helicopter burns on reservation forests.

Prescribed burning can achieve a range of other objectives, including:

Ecosystems, local cultures and economies vary throughout Oregon. Regional reasons for burning also vary. These examples from around the state highlight this diversity.

In the Willamette Valley, prescribed burning maintains native ecosystems like oak savannas and wet and upland prairies. These ecosystems exist today as a legacy of burning practices by Native American tribes such as the Kalapuya. Descendents of the Kalapuya are now part of the Confederated Tribes of Grand Ronde and Confederated Tribes of Siletz Indians. These groups continue to burn Tribal lands in the valley and assist agencies on wildlife refuges and other natural areas. They burn these ecosystems to prevent the encroachment of trees and shrubs. This encroachment can reduce habitat for endangered species and culturally important plants such as camas. Oak savannas have evolved over time in the presense of fire, too. Without fire in this system, Douglas-fir trees grow around the oaks and shade them out. Many species of birds and mammals depend on oaks. Oaks are also an important part of Indigenous cultures.

Forests on the Oregon Coast are generally too moist for prescribed burning. Some do not respond well. For example, Sitka spruce is highly sensitive to fire. Yet, prescribed burns are used in coastal prairies such as those at the Nestucca National Wildlife Refuge and Cascade Head. Without fire, these coastal grasslands would shrink as trees and shrubs encroached. Already, their extent has been greatly reduced since Native American burning practices were outlawed in the 19th century. Animals such as elk and the silverspot butterfly depend on these habitats. So do rare plants like the Cascade Head catchfly. 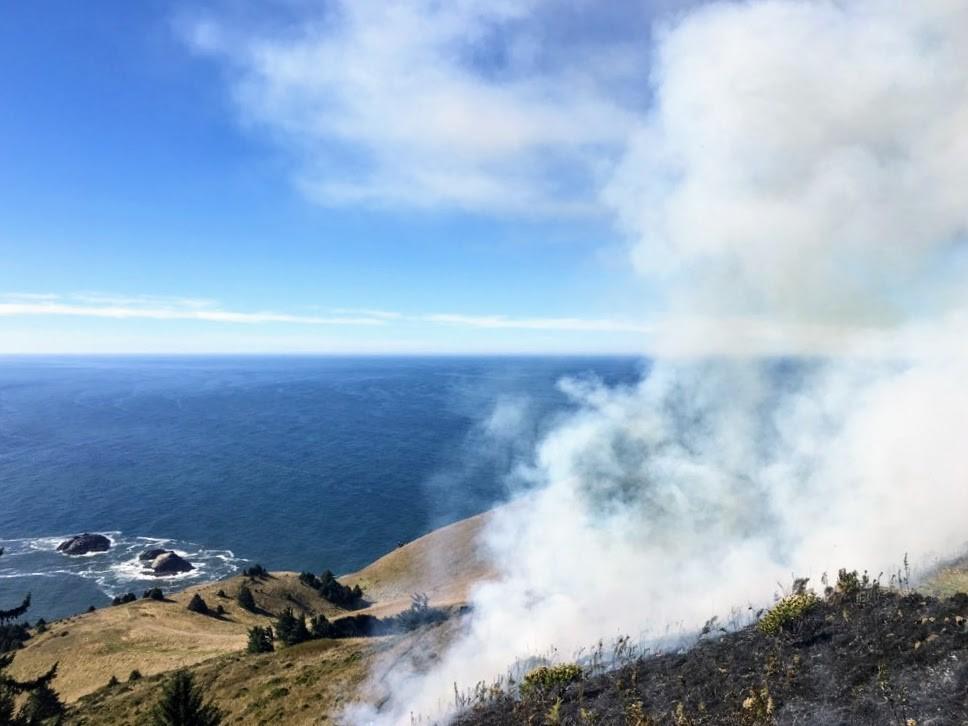 As in the Willamette Valley and the Oregon Coast, Native Americans burned prairies and oak savannas of the Umpqua and Rogue valleys. They also burned many areas of the dry forests of the Klamath-Siskiyou mountains, which see plenty of lightning, as well. Burning of pastures remains important for ranchers in the Umpqua Valley. Because trees grow vigorously in the absence of fire in the mountains of southwest Oregon, federal agencies use prescribed burning to reduce fuels and restore dry forests to their historical open structure. Prescribed fire helps protect the watersheds that provide drinking water to cities like Ashland and Medford. Because of fire risk throughout this region, private landowners are turning toward prescribed fire to reduce fuels. They formed the state’s first Prescribed Burn Association. This model of landowner cooperation helps residents access the tools, expertise and labor to conduct burns safely.

Historically, fire burned often in the pine forests of eastern Oregon, including the eastern Cascades and Blue Mountains. Lightning is abundant here, and the vegetation is adapted to the frequent fire. When federal agencies began using prescribed fire in the mid-20th century, this region saw some of the earliest efforts in the state to manage large areas of forest through underburning. Today, prescribed fires are widely used as a management tool in the dry forests of eastern and Central Oregon.

Fire was once a natural component of many range ecosystems and has received renewed interest in eastern Oregon as a vegetation management tool. Prescribed fire can help improve forage quality for livestock, manage infestations of introduced species, improve seeding efficacy and enhance wildlife habitat. Prescribed fire can also improve water quantity and quality in irrigation ditches by removing debris. This improves water for both wildlife and livestock. Over the last century, a lack of fire has caused western juniper to spread outside its historical range. This has led to a decline in rangeland quality and habitat for species like the greater sage-grouse. Controlled burns can help reduce juniper trees in sagebrush and prairie habitats, restoring these important ecosystems.